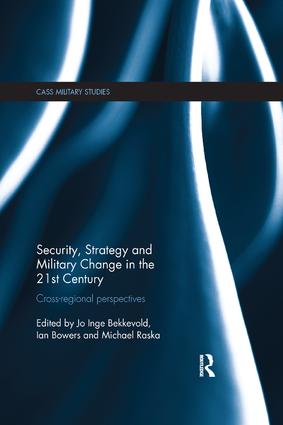 Security, Strategy and Military Change in the 21st Century

This edited volume explores and analyses strategic thinking, military reform and adaptation in an era of Asian growth, European austerity and US rebalancing.

A significant shift in policy, strategy and military affairs is underway in both Asia and Europe, with the former gaining increasing prominence in the domain of global security. At the same time, the world’s powers are now faced with an array of diverse challenges. The resurgence of great power politics in both Europe and Asia, along with the long term threats of terrorism, piracy and sustained geopolitical instability has placed great strain on militaries and security institutions operating with constrained budgets and wary public support.

The volume covers a wide range of case studies, including the transformation of China’s military in the 21st century, the internal and external challenges facing India, Russia’s military modernization program and the USA’s reassessment of its strategic interests. In doing so, the book provides the reader with the opportunity to conceptualize how strategic thinking, military reform, operational adaptation and technological integration have interacted with the challenges outlined above. With contributions by leading scholars and practitioners from Europe and Asia, this book provides a valuable contribution to the understanding of strategic and operational thinking and adjustment across the world.

This book will be of much interest to students of military and strategic studies, security studies, defence studies, Asian politics, Russian politics, US foreign policy and IR in general.

Jo Inge Bekkevold is Head of the Center for Asian Security Studies at the Norwegian Institute for Defense Studies, Oslo.

Ian Bowers is Assistant Professor at the Center for Asian Security Studies at the Norwegian Institute for Defense Studies, Oslo. He has a PhD in War Studies from Kings College, London.

Michael Raska is a Research Fellow at S. Rajaratnam School of International Studies, Singapore, and has a PhD from the National University of Singapore.