Security and Conflict in East Asia 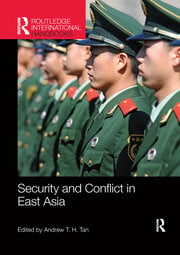 Security and Conflict in East Asia

Security and Conflict in East Asia provides a timely and thorough analysis of the sources and implications of conflict on the Korean peninsula, China and Japan, the three biggest economies in the world. This analysis provides the building blocks for effective solutions to manage these, and is a vital resource to those seeking a clearer understanding of conflict in the most pivotal region in the world. In the context of increasingly tense China-US strategic rivalry, the ever-present potential for conflict on the Korean peninsula, there are many good reasons why the high potential exists for miscalculation and misperception, sparking a regional conflict. Given the presence of nuclear-armed powers it is also possible that any regional conflict could escalate into a nuclear conflict. The security of, and any conflict in, East Asia thus has tremendous implications for global security.

The title is divided into four parts. The contributing authors are all experts in their respective fields, and all share an abiding concern over developments in East Asia. Their contributions aim to assist in a better understanding of the issues, to suggest possible solutions, and draw attention to the need for diplomacy, confidence-building measures and crisis management mechanisms conflict. The introductory section includes chapters which explain the history of international relations in East Asia and examine the phenomenon of the regional arms race. The second section is made up of a series of chapters focusing on China, examining its military modernization and relationship with the USA, as well as the various territorial disputes in which it has been involved. The third section focuses on Japan and North and South Korea, looking at the security challenges that they face. A concluding section examines the future role of China and the USA in East Asia, and the prospects for managing security in the region.

This volume will be of use to government institutions involved in foreign policy, intelligence and defence, research institutes, and academics. Scholarly analysis is yet to catch up and currently there are no other comprehensive works examining conflict in East Asia in the context of the current tensions.

Andrew T. H. Tan is Associate Professor in the School of Social Sciences, University of New South Wales, Australia. Educated at Sydney University, Cambridge University and the National University of Singapore, Andrew is consulted by various governments and think tanks on security, defence and international relations issues. He was formerly Senior Lecturer, Defence Studies, at King’s College London, based at the Joint Services Command and Staff College, Watchfield. To-date, he has written many articles on various security issues, and is also the author, editor or co-editor of 15 books, including The Arms Race in Asia (London: Routledge, 2014), East and Southeast Asia: International Relations and Security Perspectives (London: Routledge, 2013), Security Strategies in the Asia-Pacific: The USA’s Second Front in Southeast Asia (New York: Palgrave Macmillan, 2011 – nominated for the Asia Society Bernard Schwartz Book Award), US Strategy Against Global Terrorism (New York: Palgrave Macmillan, 2009), The Global Arms Trade (London: Routledge, 2010), A Handbook of Terrorism and Insurgency in Southeast Asia (Cheltenham: Edward Elgar, 2007), and others. His forthcoming book is an edited volume entitled A Handbook of US-China Relations (Cheltenham: Edward Elgar, forthcoming in 2016).