Seeing Religion
Toward a Visual Sociology of Religion 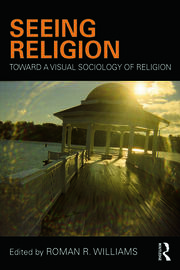 Seeing Religion: Toward a Visual Sociology of Religion

The potential of visual research methods in the sociology of religion is vast, but largely untapped. This comes as a surprise, however, given the visual, symbolic, and material nature of religion and spirituality. Evidence of religious faith and practice is materially present in everything from clothing and jewelry to artifacts found in people’s homes and workplaces. Not only is religion’s symbolic and material presence palpable throughout society, it also informs attitudes, beliefs, and behaviors of countless people worldwide. Words-and-numbers approaches to social research, however, sometimes miss important dimensions of religion and spirituality in the contemporary world. Seeing Religion is an invitation to a visual sociology of religion. Contributors draw from their current research to discuss the application of visual methods to the study of religion and spirituality. Each chapter stimulates the sociological imagination through examples of research techniques, analytical approaches, and methodological concerns.

This is an ambitious collection which takes readers to the cutting-edge of research into the visual dimensions of religion.  It introduces sophisticated theoretical ideas; it demonstrates ingenious research methods; and it illuminates the material, cultural, spatial, and embodied character of religions.  It is essential reading for all students of the visual and the religious. - James A. Beckford, University of Warwick, UK

Roman Williams’ Seeing Religion is an important contribution to the social scientific study of religion. Although visual sociology has been around for some time now, religion scholars have not taken advantage of/have largely ignored its insights. This is particularly unfortunate since we seem to be living in an increasingly visual world. This volume, therefore, adds some novel and vital tools to our methodological kit. Moreover, the multi-national and multi-disciplinary contributors show how we can use these methodological tools to gain new substantive and theoretical insights across a range of religious traditions, topics, and places. - David Yamane, Wake Forest University, USA

Religion is arguably best understood through direct somatic experience in the crucible of religious practice or ritual. Yet sociologists of religion have, by-and-large, relied on words and numbers to convey their understanding of these phenomena. Seeing Religion is an invitation to sociologists to expand their methodological repertoire to include the visual elements of religion, so as to better understand how religion is experienced through the senses. As illustrated by the different approaches deployed by the book’s contributors, the broad array of visual methodologies allows for novel lines of inquiry. This, in turn, yields fresher insights into religion than other, more conventional research methods usually allow. My hope is that readers will accept the invitation extended in Seeing Religion both to learn and utilize visual approaches in their investigations of religion, which would help us to more easily see religion for the experiential phenomenon that it is. - Richard Flory, Center for Religion and Civic Culture, University of Southern California

Drawing on a wide range of illustrated case studies by an international group of scholars, Seeing Religion presents a sophisticated application of theoretical, methodological and visual techniques for conducting religious studies with visual means. The editor’s summaries of the history and broader application of visual sociology and his chapter, "Why Study Religion Visually?" offer detailed and compelling substantiation of the field. Finally, the book offers practical advice and examples to scholars of religion who wish to incorporate visual materials into their own research. A must read for visual sociologists, sociologists of religion, and anyone interested in cutting edge social research.- Steven Gold, Professor of Sociology, Michigan State University and Co-editor (with Stephanie Nawyn) of The Routledge International Handbook of Migration Studies

Much like sociology generally, the sociology of religion has chiefly traded in words and numbers, favouring the discursive and the statistical as carriers of meaning. And yet research is increasingly turning to visual methods - including photography, video and an attentiveness to embodied identities - to shed new light on how religious identities are formed and lived. This volume gathers together some of the best examples of this research, presenting a series of essays that demonstrate how an incorporation of visual methods can help us to see religious phenomena from a fresh perspective, generating new insight and challenging our understandings of the place of religion in the modern world. Essays cover a wide range of examples from across the globe, while also integrating subtle reflection on the theories and methods that inform the analyses that emerge. This is a book that calls us to think more deeply about what we see but also about how we go about seeing it. It disrupts our assumptions about what good research can achieve and in so doing has the potential to expand the horizons of the sociology of religion. It is a fine example of what can be achieved when sociology breaks from the norm and dares to do things differently. - Mathew Guest, Reader in the Sociology of Religion, Durham University