Seeing and Being Seen
Emerging from a Psychic Retreat 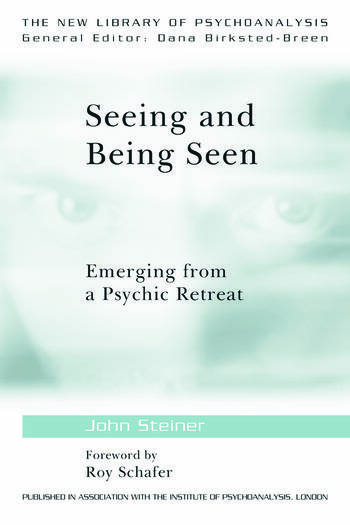 Seeing and Being Seen: Emerging from a Psychic Retreat

Seeing and Being Seen: Emerging from a Psychic Retreat examines the themes that surface when considering clinical situations where patients feel stuck and where a failure to develop impedes the progress of analysis.

This book analyses the anxieties and challenges confronted by patients as they begin to emerge from the protection of psychic retreats. Divided into three parts, areas of discussion include:

As well as offering fresh ideas, Steiner bases his creative and integrative efforts on previous contributions by psychoanalysts including Freud, Klein, Rosenfeld, and Bion. As such, this book will be of interest to psychoanalysts, clinical psychotherapists, and all those with an interest in the psychoanalytic field.

Schafer, Foreword. Introduction. Part I: Embarrassment, Shame, and Humiliation. The Anxiety of Being Seen: Narcissistic Pride and Narcissistic Humiliation. Gaze, Dominance, and Humiliation in the Schreber Case. Improvement and the Embarrassment of Tenderness. Transference to the Analyst as an Excluded Observer. Part II: Helplessness, Power, and Dominance. The Struggle for Dominance in the Oedipus Situation. Helplessness and the Exercise of Power in the Analytic Session. Revenge and Resentment in the ‘Oedipus Situation’. Part III: Mourning, Melancholia, and the Repetition Compulsion. The Conflict Between Mourning and Melancholia. Repetition Compulsion, Envy, and the Death Instinct. References. Index.

John Steiner is a training analyst of the British Psychoanalytical Society and works in private practice as a psychoanalyst. He is the author of several psychoanalytic papers and a book entitled Psychic Retreats (Routledge, 1993).

"After the great success of Psychic Retreats, published in 1993, the appearance of John Steiner’s second book is very much to be welcomed. In this book, based on nine papers published between 1996 and 2011, Steiner continues and develops his thinking on change and obstacles to change along a number of fertile lines. One of the hallmarks of his work is his experience near and humane approach, where the strengths and frailties of both patient and analyst in the psychoanalytic relationship are examined." -Jane Milton, International Journal of Psychoanalysis

"John Steiner continues the explorations he began in his excellent Psychic Retreats. In the course of fulfilling his aims, he has also summed up and enriched contemporary insight into many other aspects of the work of psychoanalysis and has laid out a Kleinian approach to resistance that is up-to-date, inclusive, and detailed." - Roy Schafer, from the Foreword

"In this book... Steiner has given us rich clinical insight, grounded in his highly sensitive understanding of what he might call the facts of life: the reality of time and loss, of our dependence on our objects, of need and power, and finally of death. Throughout the book Steiner presents clinical problems that are at once vexing and ordinary—and shows us his extraordinary capacity to not only theorize the problem at hand, but to look closely at his own involvement as perhaps a part of the problem he is trying to solve. In describing patients as they emerge from psychic retreats, he has given us a beautiful testimony to the reality of doing analytic work—its strains, pitfalls, and possibilities." - Lynne Zeavin, Journal of the American Psychoanalytic Association, 2012

"I found Seeing and Being Seen to be enormously useful, both theoretically and clinically. ... Most important, I found as I read this collection of essays, helped along especially by Steiner’s always vivid clinical examples, that I was frequently seeing my own clinical experiences in a new or different light, with possibilities opened up for movement and growth. It is hard to ask for more than this from a psychoanalytic book." - Jean Roiphe, Psychoanalytic Quarterly, October 2012, Vol. 81, No. 4