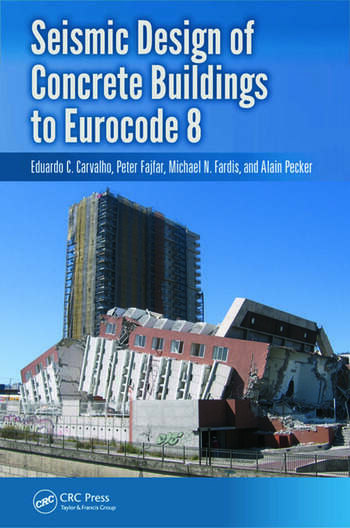 Seismic design of concrete buildings needs to be performed to a strong and recognized standard. Eurocode 8 was introduced recently in the 30 countries belonging to CEN, as part of the suite of Structural Eurocodes, and it represents the first European Standard for seismic design. It is also having an impact on seismic design standards in countries outside Europe and will be applied there for the design of important facilities.

suits graduate or advanced undergraduate students, instructors running courses on seismic design and practicing engineers interested in the sound application of EC8 to concrete buildings. Alongside simpler examples for analysis and detailed design, it includes a comprehensive case study of the conceptual design, analysis and detailed design of a realistic building with six stories above grade and two basements, with a complete structural system of walls and frames. Homework problems are given at the end of some of the chapters.

Design example: Multistorey building
Geometry and design parameters
Modelling for the analysis
Analysis
Seismic displacements from the analysis and their utilisation
Member internal forces from the analyses
Detailed design of members

Michael N. Fardis is professor and director of Structures Laboratory, Civil Engineering Department, University of Patras, Greece. He holds a MSc in civil engineering (1977) and nuclear engineering (1978), and a PhD in structural engineering (1979), all from the Massachusetts Institute of Technology (MIT). Fardis has written seven books, edited two books, and co-edited two more. He has also published more than 300 papers in international journals or conference proceedings. In addition, as chairman of the CEN Committee for Eurocode 8: ‘Design of Structures for Earthquake Resistance’ (1999–2005), he led the development of its six parts into European standards.

graduated from the Technical University of Lisbon in 1974 as a civil engineer, obtained the specialist degree in structures by the National Laboratory for Civil Engineering (LNEC) in Lisbon in 1980, and was a principal researcher at LNEC for 30 years. He is currently the chairman of Gapres, a structural design office in Lisbon; the chairman of the CEN committee for Eurocode 8: ‘Design of Structures for Earthquake Resistance’ (CEN/TC250/SC8); chairs the Portuguese mirror group for the implementation of Eurocode 8 in Portugal; and is a member of the Technical Council of federation international du béton (fib).

is a professor of structural and earthquake engineering at the Faculty of Civil and Geodetic Engineering, University of Ljubljana, Slovenia. He obtained his PhD from the University of Ljubljana (1974), and is the leader of the implementation process of Eurocode 8 in Slovenia, the first country to implement Eurocode 8. Fajfar has co-authored the first comprehensive book on earthquake engineering in former Yugoslavia, co-edited three books published by international publishers, and authored several books. In addition, he has also published more than 200 scientific papers in journals and conference proceedings, and participated in more than 100 design projects.

is the president of Géodynamique et Structure, and professor of civil engineering at Ecole des Ponts ParisTech in France. He holds a degree in civil engineering from Ecole des Ponts ParisTech and an MSc from the University of California at Berkeley. He is president of the French committee for the development of seismic design codes, was a member of the drafting panel of EN 1998-5, and has been a consultant to major civil engineering projects in seismic areas worldwide. He has also authored two books, co-authored three books, and presented 130 papers in international journals or conference proceedings.

"This new book is a perfect example of a self-contained document on seismic design that can be used as a textbook for graduate students entering the field, as well as by high level practitioners willing to go deeper into detailed explanations related to the large amount of knowledge that exists behind Eurocode 8.... The authors of the book are scientists of international renown."
— Paolo Emilio Pinto, University of Rome - La Sapienza

"The book is "problem solving" minded. It captures the attention of readers who are designers by raising practical questions on real case problems; this and helps to provide a comprehensive understanding of seismic design issues."
— Prof. Hon. André Plumier, University of Liege, Belgium

"The materials are easy to follow, clear and informative. The examples provided are realistic and challenging but illustrate well the concepts exposed. It seems like a perfect companion to Eurocode8 and achieves its aim of catering to an audience of graduate engineers, MSc students and practitioners."
— Professor Tiziana Rossetto, University College London

"… will be a great help to anyone who wishes to apply EC8 in a responsible and consistent way. It will thus be of great interest to practitioners and consultants. … contains a significant number of well thought and interesting examples and problems, that allow a thorough understanding."
— Gian Michele Calvi, IUSS, Pavia and Eucentre Foundation, Pavia, Italy

"The reader can understand the basic methods of earthquake engineering, even beyond the simple explanation of Eurocode 8. Above all, many examples are given, which allows the reader to illustrate and apply the provisions. Most of these examples are discussed, but some are left to the thoughts of the reader, a good way for him to understand."
— Philippe Bisch, EGIS Industries, Ecole des Ponts ParisTech