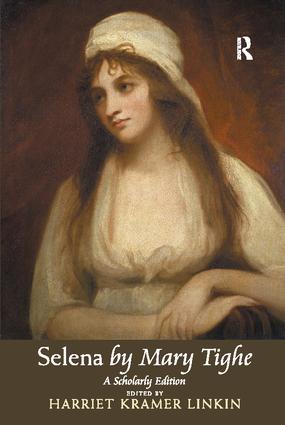 Mary Tighe's unpublished novel Selena is one of the great unknown treasures of British Romanticism. Completed in 1803, this brilliant, compulsively readable, beautifully written, and psychologically astute courtship novel is finally available in a scholarly edition that reveals Mary Tighe to have been as talented a fiction writer as she was a poet. The history of this amazing work's long journey from manuscript to print is only one of the stories Harriet Kramer Linkin recounts in this scrupulously annotated edition based on the only known copy of the manuscript, currently part of the National Library of Ireland's holdings. Linkin's introduction situates the novel in its historical context, draws attention to significant aspects of the plots and characters, and makes a strong case for Selena's importance for understanding the history of the novel, fiction by women, Anglo-Irish fiction, silver-fork novels, and the Romantic period. Explanatory notes explain obscure references and contexts, identify allusions to other writers, and provide translations of any non-English or archaic words. Selena itself is a revelation in its frank treatment of the darker aspects of Tighe's world, including parents who mistreat, cheat, or fail their children and spouses who commit adultery or betray one another emotionally. At the same time, it is magnificent in its stunning and moving portrayals of romantic love, of the possibility and importance of female friendship, of the difficult necessity of choosing sense over sensibility, and of the need for women and men to choose self-enhancing vocations. This extraordinary novel is destined to open up new ways of thinking by scholars of the Romantic era and the history of the novel.

'Mary Tighe was one of the most gifted, innovative, and influential poets of the British Romantic era. What a treat to have published, at long last, Tighe's only novel, unknown to all but a few of her closest contemporaries. Harriet Kramer Linkin's fascinating, informative and well-researched introduction makes a compelling case for the novel and draws intriguing connections between it and more familiar works of the period. Selena not only helps to contextualize Tighe's exquisite poetry but gives us deeper insight into Tighe's intellect, sensibility and powers of imagination.' Paula R. Feldman, University of South Carolina, author of British Women Poets of the Romantic Era 'Tighe's expansive novel employs Gothic tropes and social satire to give a powerfully unsettling representation of gender and power; this welcome edition of her previously unpublished work extends our knowledge of Romantic women's writing.' Aileen Douglas, Trinity College Dublin '… a gold mine for social historians… Recommended. Upper-division undergraduates through faculty.' Choice 'Linkin now offers the first edition of Selena, complete with a useful introduction and excellent notes… Harriet Linkin's scholarly edition will be invaluable in giving Selena the attention it deserves…' Times Literary Supplement 'A very attractive feature of the edition is its incorporation of eight illustrations from an 1805 manuscript volume, where the watercolours accompany the same poems which are reproduced within the novel … [this is] a very fine scholarly edition which brings this previously 'hidden' work to light.' BARS Review

Harriet Kramer Linkin is Professor of English at New Mexico State University, USA. She edited The Collected Poems and Journals of Mary Tighe (2005), is co-editor, with Stephen C. Behrendt, of Approaches to Teaching Women Poets of the British Romantic Period (1997) and Romanticism and Women Poets (1999), and is the author of numerous articles on Romantic Period writers.