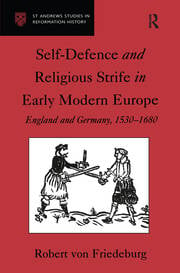 Recent research has begun to highlight the importance of German arguments about legitimate resistance and self-defence for French, English and Scottish Protestants. This book systematically studies the reception of German thought in England, arguing that it played a much greater role than has hitherto been acknowledged. Both the Marian exiles, and others concerned with the fate of continental Protestantism, eagerly read what German reformers had to say about the possibility of resisting the religious policies of a monarch without compromising the institution of monarchy itself. However, the transfer of German arguments to England, with its individual political and constitutional environment, necessarily involved the subtle transformation of these arguments into forms compatible with local traditions. In this way, German arguments contributed significantly to the emergence of new theories, emphasising natural rights.