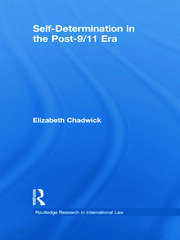 This book discusses the increasing tendency in certain government quarters to incorporate struggles by peoples for their self-determination into the wider anti-terrorist agenda of the post-9/11 era. This tendency distorts the laws of armed conflict and of peace alike. As inter-state anti-terrorist co-operation becomes more extensive, the transaction costs of international peace and security between states increase. Modes of domestic state governance are left increasingly to the vagaries of inter-state non-interference in the domestic affairs of each other. The ‘war on terror’ and an increasingly strict, domestic state law-and-order approach to silence political opponents increases the dangers for civilians, eliminates rights, and generates suspect communities. At the same time, public institutions and private corporations are harnessed into the mechanics of a broad project of prevention and control.

Distinctively, the book considers the impact of the recent ‘war on terror’ on the politics of the self-determination of peoples. It draws together issues related to governmental forceful action, an increasing intolerance towards non-state violent acts, the content of international and regional codifications, expansions in state discretion, the encroachment of surveillance powers, and the interaction and overlap between intelligence and law enforcement agencies.

1. Introduction  2. Perspectives on Self-Determination in the Post-9/11 Era 3. The Role of Laws of Warfare  4. ‘Peace’ is ‘War’ 5. The Growth in Linkage between Self-Determination and Terrorism: International and Regional Instruments 6. Post-9/11 Statutes and Case Law of the Security Council Permanent Members 7. Conclusions and Final Remarks