Sensors, Cloud, and Fog
The Enabling Technologies for the Internet of Things 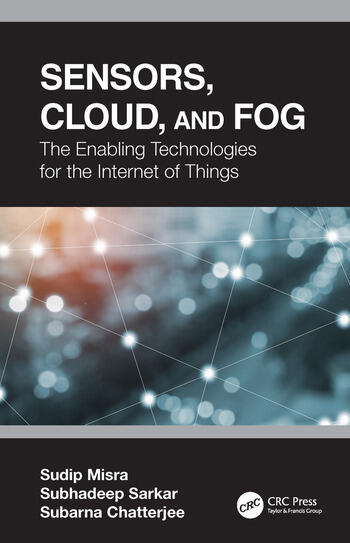 Sensors, Cloud, and Fog: The Enabling Technologies for the Internet of Things

This book provides an in-depth understanding of Internet of Things (IoT) technology. It highlights several of today's research and technological challenges of translating the concept of the IoT into a practical, technologically feasible, and business-viable solution. It introduces two novel technologies--sensor-cloud and fog computing--as the crucial enablers for the sensing and compute backbone of the IoT. The book discusses these two key enabling technologies of IoT that include a wide range of practical design issues and the futuristic possibilities and directions involving sensor networks and cloud and fog computing environments towards the realization and support of IoT.

Classroom presentations and solutions to end of chapter questions are available to instructors who use the book in their classes.

1. History and Evolution of Cloud Computing.

3. Introduction to the Internet of Things.

6. Pricing and Networking in Sensor-Cloud.

7. Implications of Sensor-Cloud on the Internet of Things.

11. Towards a "Green"-er Internet of Things.

Prof. Sudip Misra is a Professor in the Department of Computer Science and Engineering at the Indian Institute of Technology Kharagpur. Prior to this he was associated with Cornell University (USA), Yale University (USA), Nortel Networks (Canada) and the Government of Ontario (Canada). He received his Ph.D. degree in Computer Science from Carleton University, in Ottawa, Canada. He has several years of experience working in the academia, government, and the private sectors in research, teaching, consulting, project management, architecture, software design and product engineering roles.

Prof. Misra was also awarded the Canadian Government's prestigious NSERC Post Doctoral Fellowship and the Humboldt Research Fellowship in Germany. Prof. Misra has been serving the editorial boards of distinguished journals such as the International Journal of Communication Systems (Wiley) and the IET Wireless Sensor Systems (UK). In the past, he served as the Associate Editor/Editorial Board Member of the Telecommunication Systems Journal (Springer), Security and Communication Networks Journal (Wiley), and the EURASIP Journal of Wireless Communications and Networking, IET Communications Journal, and the Computers and Electrical Engineering Journal (Elsevier).

Dr. Subhadeep Sarkar is currently a postdoctoral researcher in the MYRIADS project team at INRIA, Rennes, France working with Dr. Christine Morin. His current research interestsinclude Internet of things (IoT), fog and cloud computing, and the various privacy issues in the context. He completed his PhD from Indian Institute of Technology (IIT), Kharagpur, India in 2017 under the supervision of Dr. Sudip Misra. His doctoral research was focused on performance analysis of Wireless Body Area Networks (WBANs) in reference to the IEEE 802.15.6 standardization. His research results have been published in several reputed international journals and conferences. Dr. Sarkar have reviewed numerous manuscripts for reputed international journals and conferences, and served as a TCP member for multiple peer-reviewed conferences. He was also selected as one of the most promising young researcher in computer science to attend the 4th Heidelberg laureate Forum in 2015.

Dr. Subarna Chatterjee is a post-doctoral researcher at Inria, Rennes, France. She is a Google Anita Borg Scholar from the Asia Pacific region (2015) and is a Facebook GraceHopper Scholar (2016). She received her Ph.D. as a TCS Research Scholar from the Department of Computer Science & Engineering, Indian Institute of Technology, Kharagpur, India in 2017. Her current research interests include big data stream processing, cloud computing, and Internet of Things.