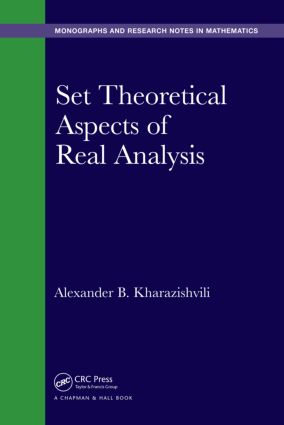 Set Theoretical Aspects of Real Analysis is built around a number of questions in real analysis and classical measure theory, which are of a set theoretic flavor. Accessible to graduate students, and researchers the beginning of the book presents introductory topics on real analysis and Lebesgue measure theory. These topics highlight the boundary between fundamental concepts of measurability and nonmeasurability for point sets and functions. The remainder of the book deals with more specialized material on set theoretical real analysis.

The book focuses on certain logical and set theoretical aspects of real analysis. It is expected that the first eleven chapters can be used in a course on Lebesque measure theory that highlights the fundamental concepts of measurability and non-measurability for point sets and functions. Provided in the book are problems of varying difficulty that range from simple observations to advanced results. Relatively difficult exercises are marked by asterisks and hints are included with additional explanation. Five appendices are included to supply additional background information that can be read alongside, before, or after the chapters.

Dealing with classical concepts, the book highlights material not often found in analysis courses. It lays out, in a logical, systematic manner, the foundations of set theory providing a readable treatment accessible to graduate students and researchers.

ZF theory and some point sets on the real line

Measurability properties of sets and functions

A partition of the real line into continuum many thick subsets

A relationship between the measurability and continuity of real-valued functions

A combinatorial problem on translation invariant extensions of the Lebesgue measure

Appendix 1: The axioms of set theory

Appendix 2: The Axiom of Choice and Generalized Continuum Hypothesis

Appendix 3: Martin’s Axiom and its consequences in real analysis