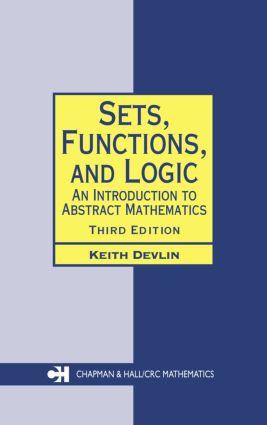 Keith Devlin. You know him. You've read his columns in MAA Online, you've heard him on the radio, and you've seen his popular mathematics books. In between all those activities and his own research, he's been hard at work revising Sets, Functions and Logic, his standard-setting text that has smoothed the road to pure mathematics for legions of undergraduate students.

Now in its third edition, Devlin has fully reworked the book to reflect a new generation. The narrative is more lively and less textbook-like. Remarks and asides link the topics presented to the real world of students' experience. The chapter on complex numbers and the discussion of formal symbolic logic are gone in favor of more exercises, and a new introductory chapter on the nature of mathematics--one that motivates readers and sets the stage for the challenges that lie ahead.

Students crossing the bridge from calculus to higher mathematics need and deserve all the help they can get. Sets, Functions, and Logic, Third Edition is an affordable little book that all of your transition-course students not only can afford, but will actually read…and enjoy…and learn from.

Dr. Keith Devlin is Executive Director of Stanford University's Center for the Study of Language and Information and a Consulting Professor of Mathematics at Stanford. He has written 23 books, one interactive book on CD-ROM, and over 70 published research articles. He is a Fellow of the American Association for the Advancement of Science, a World Economic Forum Fellow, and a former member of the Mathematical Sciences Education Board of the National Academy of Sciences,.

Dr. Devlin is also one of the world's leading popularizers of mathematics. Known as "The Math Guy" on NPR's Weekend Edition, he is a frequent contributor to other local and national radio and TV shows in the US and Britain, writes a monthly column for the Web journal MAA Online, and regularly writes on mathematics and computers for the British newspaper The Guardian.

"The book is written in a language both accessible and attractive to students. The author succeeds in not falling into the trap of a sort of 'mathematical baby talk' to meet his goals. … Students crossing the bridge from calculus to higher mathematics will find the book very helpful. But it is also very helpful to academics in other areas who want to have access to mathematical publications relevant to their fields, but need to become familiar with the notations and language currently used by research mathematicians."

WHAT IS MATHEMATICS AND WHAT DOES IT DO FOR US?

It's Not Just Numbers

This is Where You Come In

The Study of Modern Mathematics

The Language of Mathematics: Part 1

Properties of the Language

The Language of Mathematics: Part 2

The Historical Development of Set Theory

History of the Modern Function Concept

One-One and onto Functions

Relations as Sets of Ordered Pairs

An Example: the Reals

No Answers to the Exercises