Settlement and Soldiers in the Roman Near East 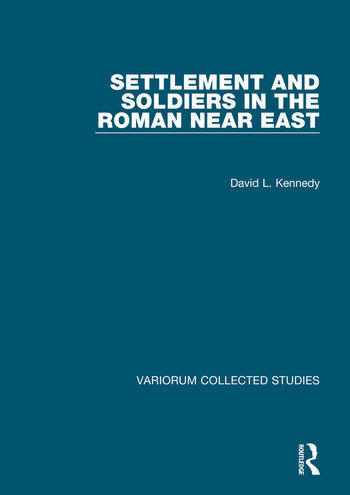 Settlement and Soldiers in the Roman Near East

The Roman Near East has been a source of fascination and exasperation - an immense area, a rich archaeological heritage as well as documents in several local languages, a region with a great depth of urbanisation and development ... yet relatively neglected by modern researchers and difficult to work on and in. Local archaeologists are often under-funded and the Roman period viewed as an earlier phase of western colonialism. Happily, the immense surge in archaeological and historical research on the Roman period everywhere has included the Roman Near East and there have been significant academic developments. This collection of studies on the Roman Near East represents Professor Kennedy’s academic assessment of the region, which began with his doctoral thesis on the contribution of Syria to the Roman army. Although the thesis was never published, several articles owe their genesis to work done then or soon after and are included here (VI, VII, IX, XII). Initial visits to military sites in Syria and Jordan swiftly brought out the presence in many cases of associated civil settlements and - though often now gone, the traces of ancient field systems. Hence, the two prominent sub-themes in this collection are the Roman military and various aspects of society and settlement - settlement types, farming, logistical underpinning and communications.

Contents: Preface; Part I The Roman Near East: The Roman near East; Demography, the population of Syria and the census of Q. Aemilius Secundus. Part II Settlement: The identity of Roman Gerasa: an archaeological approach; The frontier of settlement in Roman Arabia: Gerasa to Umm el-Jimal … and beyond; Water supply and use in the Southern Hauran, Jordan. Part III Soldiers: The special command of M. Valerius Lollianus; C. Velius Rufus; Legio VI Ferrata, the annexation and early garrison of Arabia; The construction of a vexillation from the army of Syria and the origin of alae milliariae; The garrisoning of Mesopotamia in the late Antonine and early Severan period; ‘Europaean’ soldiers at the Severan siege of Hatra; The military contribution of Syria to the Roman imperial army; Two Nabataean and Roman sites in southern Jordan: Khirbet el-Qirana and Khirbet el-Khalde; Addenda; References; Index.

David L. Kennedy is Winthrop Professor of Classics and Ancient History at the University of Western Australia, Australia.

'... the quality of the papers is excellent, and all of them are well worth reprinting and re-reading. ... this volume is invaluable and strongly recommended.' Bryn Mawr Classical Review