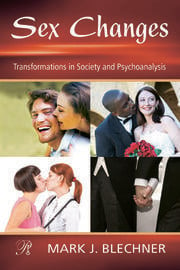 The last half-century has seen enormous changes in society’s attitude toward sexuality. In the 1950s, homosexuals in the United States were routinely arrested; today, homosexual activity between consenting adults is legal in every state, with same-sex marriage legal in Massachusetts and Connecticut. In the 1950s, ambitious women were often seen as psychopathological and were told by psychoanalysts that they had penis envy that needed treatment; today, a woman has campaigned for President of the United States.

Mark Blechner has lived and worked through these startling changes in society, and Sex Changes collects papers he has written over the last 45 years on sex, gender, and sexuality. Interspersed with these papers are reflections on the changes that have occurred during that time period, both within the scope of society at large as well as in his personal experiences inside and outside of the therapeutic setting. He shows how changes in society, changes in his life, and changes in his writing on sexuality - as well as changes within psychoanalysis itself - have affected one another.

One hundred years ago, psychoanalysis was at the cutting edge of new ideas about sex and gender, but in the latter half of the 20th Century, psychoanalysts were often seen as reactionary upholders of society’s prejudices. Sex Changes seeks to restore the place of psychoanalysis as the "once and future queer science," and aims for a radical shift in psychoanalytic thinking about sexuality, gender, normalcy, prejudice, and the relationship of therapeutic aims and values.

Part I: Psychoanalysis, Sexuality, and Prejudice. Homosexuality and the Rorschach Test. Psychoanalysis In and Out of the Closet. The Experience of Hating and Being Hated. Homophobia in Psychoanalytic Writing and Practice: A Comment on Trop and Stolorow (1992) and Hanna (1992). The Interaction of Societal Prejudice with Psychodiagnosis and Treatment Aims. The Closeting of History. Selective Inattention and Bigotry: A Discussion of the Film Trembling Before G-d. Part II: Sex, Gender, and the Good Life. Maleness and Masculinity. Disgust, Desire, and Fascination: Psychoanalytic, Cultural, Historical, and Neurobiological Perspectives. The Gay Harry Stack Sullivan: Interactions Between His Life, Clinical Work, and Theory. AIDS. Intimacy, Pleasure, Risk, and Safety. Love, Sex, Romance, and Psychoanalytic Goals. Polymorphous Without Perversity: A Queer View of Desire. Erotic and Anti-erotic Transference. The Political is Psychoanalytic: On Same-sex Marriage.

Mark J. Blechner, Ph.D., is a psychologist and psychoanalyst in New York City. Along with 50 articles and book chapters, he has published three books - Hope and Mortality (Analytic Press, 1997), The Dream Frontier (Analytic Press, 2001), and Sex Changes: Transformations in Society and Psychoanalysis (Routledge, 2009) - and is the editor-in-chief of the journal Contemporary Psychoanalysis. He is a training and supervising psychoanalyst at William Alanson White Institute, where as founder and director of its HIV Clinical Service from 1991 until 2001, he led the first psychoanalytic clinic devoted to working with people with AIDS, their relatives, and caregivers. He has taught at Columbia University, Yale University, and New York University.

"Psychoanalysts are supposed to know about sex. Freud’s contributions, centered on sexuality and psychoanalysis, began as a progressive social movement that promised to liberate people’s sexuality.  And yet, we psychotherapists and psychoanalysts do not know about sex, at least not nearly enough.  Our training rarely includes a thorough study of the diversity of sexuality, and our ignorance limits and even interferes in our work and perpetuates bias and prejudice.  With Sex Changes, Mark Blechner, in a brilliant transvaluation of the term perversion, proclaims himself a ‘professional pervert’ and challenges us to overcome our homo-ignorance and our sexual benightedness more broadly, to facilitate a return to psychoanalysis being once again a progressive and even revolutionary ‘queer science.’ He blends an intimate, deeply moving biographical account with a theoretically sophisticated, scholarly, jargon-free narrative. All practicing therapists should read this book – who knows where it will lead?" - Lewis Aron, Director, NYU Postdoctoral Program in Psychotherapy and Psychoanalysis, USA

"Blechner's impassioned plea for a more enlightened psychoanalysis of desire offers the reader an unusual opportunity: to track the emergence of an author's ideas in their personal, social, and psychoanalytic contexts. In each chapter's preface, he recounts how, during the two decades in which he wrote these essays, his own sexuality evolved in tandem with the changing intellectual and professional climate and the development of his own thought. Consistently illuminating, this book is not to be missed." - Muriel Dimen, Editor, Studies in Gender and Sexuality

"Mark Blechner’s new book, Sex Changes, traces a most extraordinary arc, both liberatory and tragic. At a personal level – and the work is personal – we can feel courage and anguish alongside delight and growth. Blechner’s papers, accompanied by invaluable personal introductions, link up history, personal history, psychoanalytic history, and evolving theory in a fascinating new gestalt. What we learn is that lifting prejudice improves matters at every level of our being, personal and social. In these essays Blechner shows us an evolving complexity of desire, sexuality, homosexuality and heterosexuality, gender and gender variance, and homophobia, in a way that illuminates that the break for freedom is good for people, but also really good for psychoanalytic theory, its institutions, and its practice." - Adrienne Harris, NYU Postdoctoral Program in Psychotherapy and Psychoanalysis, USA

"We read Blechner's Sex Changes: Transformations in Society and Psychoanalysis as a tour-de-force...one that accurately outlines the struggle for homosexuals to adapt and live not only in a faith-driven American society but also in the field of psychoanalysis itself, both as patients and as therapists. Blechner's work, a deliberate blending of memoir and academic writing, both shows and tells the story of homosexuality in the United States in teh last half of the 20th Century, a story poignant, provocative, and perverse...What emerges across these occasionally uneven and stylistically experimental chapters is an ambivalent tale of evolution, both of a brave man and of a not-always-brave field...thoughtful and innovative." - Gabriel Rupp and Patrick Kubier in PsycCRITIQUES

"[Blechner] has the great clinician's eye for the details that light up a story and a knack for positing 'mind experiments' to help even a disapproving reader make the leap to understand his perspective. I am happy to have had the opportunity to review this volume. Speaking plainly, but without self-pity, of the misery and the sense of being estranged, he seeks to document the distortions of personality that are the result of institutionalized prejudice. The bibliography alone is worth the price of admission. Blechner speaks most eloquently of the 'great yearning for socially sanctioned relations.' A necessary and eloquent contribution to the discussion about sexuality, not just homosexuality, in our shared profession. Please, Dr. Blechner, do not stop writing and presenting your work in mainstream psychoanalytic settings. It is still necessary." -Sherry Katz-Bearnot, MD, Assistant Clinical Professor of Psychiatry, Columbia University College of Physicians and Surgeon

"...offers the reader a personal, historical, and clinical account of psychoanalysis' responses to homosexuality, the AIDS epidemic, and gender identity. It is both richly informative for those new and old to the literature and powerfully persuasive about the detrimental role psychoanalysis has played in the lives of gay and lesbian people. Inspiringly, Dr. Blechner does not end with his critiques. Rather, he calls upon the reader to challenge his/her prejudices and assumptions." - Karen Weisbard, Psy.D., DIVISION/Review Vol.1 No.1

"Sex Changes shows how psychoanalysis has implicitly enacted shaming cultural attitudes towards many aspects of human sexuality, homosexuality in particular, despite having promoted itself as a discipline dedicated to understanding human sexuality in a scientific rather than a moralistic manner. Blechner, through inclusion of his own experiences as a gay analyst, recounts the shameful history of psychoanalysis in its treatment of homosexuality...psychoanalysts who are members of the sexual majority who wish to have greater understanding of and empathy for the experiences of sexual minorities, especially of gay men, will learn a lotfrom reading Blechner's book; as will psychoanalysts who are members of sexual minorities who want to better understand the history and dynamics of homophobia within the profession." - Lawrence Josephs, The American Journal of Psychoanalysis