Sexual Identities and the Media
An Introduction 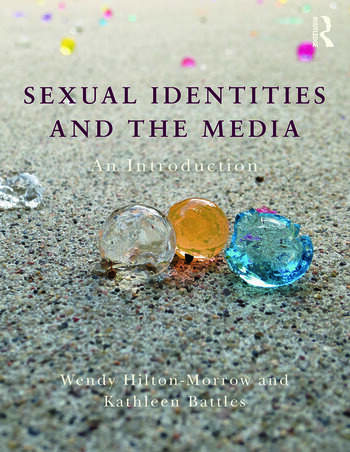 Sexual Identities and the Media: An Introduction

Sexual Identities and the Media encourages students to examine media as a site of negotiation for how people make sense of their own and others’ sexual identities. Taking a critical/cultural approach, Wendy Hilton-Morrow and Kathleen Battles weave together theory, synthesis of existing research, and original analysis of contemporary media examples in order to explore key areas of debate, including:

Wendy Hilton-Morrow is Associate Professor of Communication Studies and Associate Dean of the College at Augustana College. She is co-editor of War of the Worlds to Social Media: Mediated Communication in Times of Crisis (Peter Lang, 2013).

is Associate Professor in the Department of Communication and Journalism at Oakland University. She is the author of Calling All Cars: Radio Dragnets and the Technology of Policing (U of Minnesota Press, 2010) and co-editor of War of the Worlds to Social Media: Mediated Communication in Times of Crisis (Peter Lang, 2013).

"Theoretically informed and clearly written, Sexual Identities and the Media is an important introduction to sexuality, media, and popular culture. Using a rich selection of traditional and new media examples and case studies, Hilton-Morrow and Battles take the reader through a journey to unpack the complex relationship between sexual identity, representation, power, and politics. This is a timely, informative, and significant text." —Gust A. Yep, San Francisco State University, USA; Recipient of the NCA Randy Majors Memorial Award for Outstanding LGBTQ Scholarship in Communication

"Finally, we have a compelling, clearly written, thoroughly researched introduction for undergraduates to a rich history and variety of gay, lesbian, bisexual, transgender, and queer media and scholarship. Hilton-Morrow and Battles outline crucial terms and explore key debates in the field of GLBTQ media, including the value of visibility, the prevalence of stereotypes, the dimensions of the closet, and the ongoing marginalization of transgendered people. They rigorously engage intersecting social hierarchies such as class, race, and gender to complicate simplistic narratives of progress in gay images. The authors avoid the pitfalls of a medium-by-medium treatment of GLBTQ representations to address the continuities of these representations across various genres and platforms. The authors also offer a series of useful exercises aimed to denaturalize assumptions about sexuality and gender binaries. Sexual Identities and the Media is essential course reading for students and teachers of GLBTQ media." —Katherine Sender , University of Auckland, New Zealand

"This book provides just the kind of introduction to the topic we have long needed. It gives the reader the historical context and conceptual tools needed to critically engage with the complex issues that arise when the politics of sexual identity intersect with media representations. And it does so in a thoroughly accessible manner and through an impressive range of examples." —Ron Becker, Miami University, USA; author of Gay TV and Straight America

"Resisting a clean or tidy narrative of LGBTQ visibility and progress, Sexual Identities and the Media weaves a rich and complicated intervention into how sexualities are named, historicized, produced, commodified, contained, and resisted on the mainstream cultural screen. The book anticipates and fosters a broad range of engagement points for students. Both contemporary and durable, the text balances current examples with a complex web of theoretical tools from humor studies, media studies, critical/cultural studies, gay and lesbian studies, and queer theory, offering a complicated examination of the mediating of sexual identities." —Dustin Goltz, DePaul University, USA

"If you were thinking about adopting a text for a course on gender and the media, you would not go wrong in picking this one. In fact, if you were thinking about adding a text to any course on influence of the media or on gender stereotypes you would not go wrong here either. Wendy Hilton-Morrow and Kathleen Battles have written an interesting, accessible, and informative undergraduate text for those who are curious about how various media reflect and (re)constitute representations of sexual identities. This volume is full of contemporary examples from stock media (film, television) and new media (web series, vlogging)... [The] text's modus operandi is to show how critically derived close readings of media representations are done and what they achieve. The authors excel at this... I recommend this text for psychologists teaching relevant courses, but I think it should also be read by psychologists more generally, those who teach and those who merely want to be current: It is broadly informative about what many undergraduates already know and think they know." --Marianne LaFrance, Yale University, USA, in PsycCRITIQUES