Sexuality and Law
Volume I: Family and Youth 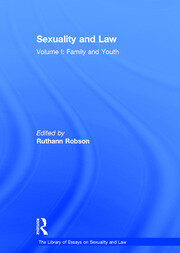 Sexuality and Law: Volume I: Family and Youth

The legal regulation of family forms is a global phenomenon and changes in the 'traditional' family have provoked a variety of legal responses. Same-sex marriage, civil partnerships and other legal avenues to recognize intimate relationships between adults have become a feature of many jurisdictions and a subject for debate in most. Parenting has also become contentious, whether the issue is custody, adoption, or legal recognition of parental status of a non-biological parent. How the law should regulate or protect the sexuality and gender identity of youth is a matter of great concern throughout many countries. The sexuality of the elderly members of societies is beginning to be considered. The papers reprinted in this volume contain discussions, analysis and theoretical challenges to legal regulations and definitions of family, to the primacy of marriage as a legal relationship, to the determination of 'sex' in opposite-sex requirements for marriage and to the treatment of sexual minority elders. The volume also covers specific topics regarding children, including doctrinal and theoretical frameworks relating to the adoption of children, the primacy of genetic ties in parenting, the legal and medical status of intersex children and issues of 'queer youth' in society and in court.

Ruthann Robson is Professor of Law and University Distinguished Professor at the City University of New York School of Law, where she has taught in the areas of Constitutional Law and Sexuality and Law since 1990. She is the author of several books about sexuality and legal theory, including Lesbian (Out)Law and Sappho Goes to Law School, as well numerous articles published in the United States, UK, Canada, New Zealand, Australia, and South Africa. She frequently speaks about sexuality issues throughout the world.