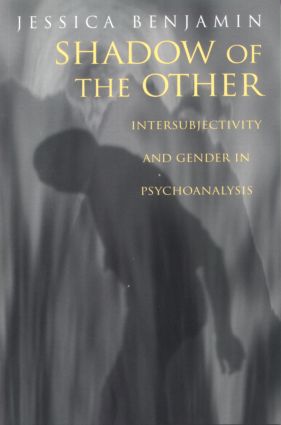 Shadow of the Other

Shadow of the Other is a discussion of how the individual has two sorts of relationships with an "other"--other beings, other individuals. The first regards the other as an entirely different being from oneself, but one which is still recognizable. The second understands and recognizes this other by its function as a repository of characteristics cast from oneself.

In recognizing how this dual relationship is reconciled within the self, and its implications in male/female relations, Jessica Benjamin continues her exploration of intersubjectivity and gender, taking up questions of contemporary debates in feminist theory and psychoanalysis.

"Jessica Benjamin's latest effort to bring critical theory and psychoanalysis into a dynamic conversation results in many splendid insights. She defends her provocative claim that psychoanalysis is an extension of the Enlightenment, clarifies her own relational contribution to object-relations theory, and insists that harboring alterity within the self remains the ideal for psychic life. Along the way, she emphasizes the importance of undoing repudiations, of rewriting the oedipal and pre-oedipal in relation to gender polarity, and reminds us of the oscilliation of gender categories. In calling for a reintegration of the preoedipal into the postoedipal, she makes the matter of intersubjective recognition at once complex and urgent." -- Judith Butler, University of California, Berkeley

"Shadow of the Other extends Benjamin's groundbreaking and influential studies of gender, intersubjectivity, love and aggression. Her original elaboration of intersubjectivity serves to intertwine feminism and relational psychoanalysis into a tightly woven and richly textured intellectual tapestry. What really sets Benjamin's work apart is her brilliant utilization of a systematic dialectical approach to her subject, always maintaining the delicate balance between opposing tensions: masculinity and femininity, subjectivity and objectivity, passivity and activity, love and aggression, fantasy and reality, modernism and postmodernism, the intrapsychic and the intersubjective. Benjamin's capacity to creatively play with intellectual ideas is unsurpassed as she continually spins concepts around, moving in new, unexpected, and surprisingly useful directions." -- Lewis Aron, Ph.D., ABPP New York University Postdoctoral Program

"The Shadow of the Other… is an impressive effort at building and integrating theory in the domain of feminism, gender, object relations theory, and intersubjectivity." -- Journal of the American Psychoanalytic Association

"A timely volume for gender studies programs, and for graduate programs with psychoanalytic components." -- Choice

"[Benjamin] champions a sophisticated view of the way we internalize the other, while seeking to avoid the danger of allowing talk about mutual recognition and caring to become a way to trap women back into their traditional role as the sole caring ones. This is an important book." -- Tikkun

"In this tightly written and carefilly argued essay, she addresses the problem of the Other's consciousness." -- Journal of Feminist Family Therapy

"Shadow of the Other has much to offer the sophisticated reader who is willing to work a little to appreciate the complex ideas contained within it. Its intellectual and esoteric qualities make it well suited to academe." -- Psychoanalytic Books

"While many of Benjamin's points in this book are not new within psychology, many of her specific formulations of them are, as well as her drawing together of these points with support from apparently divergent schools of thought." -- Transformations

Jessica Benjamin is a psychoanalyst in New York City, where she is on the faculty of the New York University Postdoctoral Program in Psychotherapy and Psychoanalysis. She is the author of Bonds of Love (1988) and Like Objects, Love Objects (1995).