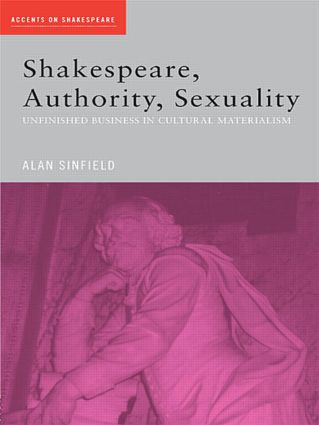 Shakespeare, Authority, Sexuality is a powerful reassessment of cultural materialism as a way of understanding textuality, history and culture, by one of the founding figures of this critical movement. Alan Sinfield examines cultural materialism both as a body of ongoing argument and as it informs particular works by Shakespeare and his contemporaries, especially in relation to sexuality in early-modern England and queer theory.

The book has several interlocking preoccupations:

These preoccupations are explored in and around a range of works by Shakespeare and his contemporaries. Throughout the book Sinfield re-presents cultural materialism, framing it not as a set of propositions, as has often been done, but as a cluster of unresolved problems. His brilliant, lucid and committed readings demonstrate that the ‘unfinished business’ of cultural materialism - and Sinfield’s work in particular - will long continue to produce new questions and challenges for the fields of Shakespeare and Renaissance Studies.

'If there were a version of Desert Island Discs for literary criticism, this book would top the list of things I would want with me to read again and again for its clarity of purpose, its generosity of spirit, the brilliance of its insights, and its ability to engage seamlessly and resonantly with current scholarship, contemporary politics, historical dynamics, and the meanings of Shakespeare.' - Lena Cowen Orlin, University of Maryland, USA, and Executive Director of the Shakespeare Association of America

'Alan Sinfield has been one of the most thoughtful and provocative writers on early modern culture for the last two decades and his critical power is evident throughout this book.' - Kate McLuskie, Director of the Shakespeare Institute, Stratford-upon-Avon, UK

'Those familiar with Sinfield's previous work will need no encouragement to read the book, and newcomers will find it an excellent introduction.' - The British Theatre Guide

1. Unfinished Business: Problems in Cultural Materialism 2. Pastoral, As You Like It, and the Ideology of Literary History 3. Poetaster, The Author, and the Perils of Cultural Production 4. How to Read The Merchant Of Venice Without Being Heterosexist 5. Cultural Materialism And Intertextuality: The Limits of Queer Reading in A Midsummer Night’s Dream and The Two Noble Kinsmen 6. Effeminacy, Friendship and the Hero in Marlowe and Shakespeare 7. Near Misses: Ganymedes and Pageboys 8. Sex and the Lyric: Sidney, Barnfield, Marlowe 9. What Happens in Shakespeare’s Sonnets 10. Rape and Rights: Measure For Measure and the Limits of Cultural Imperialism 11. Unfinished Business: Reprise Bibliography Index

Since the New Accents series was established, 'theory' as a fundamental feature of the study of literature, the need for short, 'cutting-edge' accounts of and comments on new developments in literary studies has increased enormously. In the case of Shakespeare, Accents on Shakespeare supplies an exciting range of provocative new titles. The books in the series either apply theory, or broaden and adapt it to connect with teaching concerns. In the process they also reflect and engage with the major developments in Shakespearean studies of recent years.