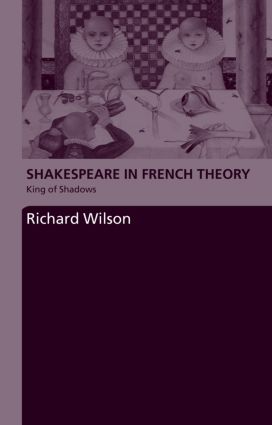 At a time when the relevance of literary theory itself is frequently being questioned, Richard Wilson makes a compelling case for French Theory in Shakespeare Studies. Written in two parts, the first half looks at how French theorists such as Bourdieu, Cixous, Deleuze, Derrida and Foucault were themselves shaped by reading Shakespeare; while the second part applies their theories to the plays, highlighting the importance of both for current debates about borders, terrorism, toleration and a multi-cultural Europe.

Contrasting French and Anglo-Saxon attitudes, Wilson shows how in France, Shakespeare has been seen not as a man for the monarchy, but a man of the mob. French Theory thus helps us understand why Shakepeare’s plays swing between violence and hope. Highlighting the recent religious turn in theory, Wilson encourages a reading of plays like Hamlet, Julius Caesar, A Midsummer Night’s Dream and Twelth Night as models for a future peace.

Examining both the violent history and promising future of the plays, Shakespeare in French Theory is a timely reminder of the relevance of Shakespeare and the lasting value of French thinking for the democracy to come.

'Wilson’s originality, scholarship, theoretical flair and eloquence have already secured him a place in the front rank of Shakespeare critics. These qualities are on full display in King of Shadows, and they will ensure that this fiercely engaged book has the impact it deserves to have on the future of Shakespeare studies across the globe.' - Kiernan Ryan, Royal Holloway, University of London, UK

'This was a truly invigorating read and impressively internationalist in scope and import.' - Gabriel Egan, Loughborough University, UK

' Wilson is an infectiously enthusiastic guide to one of the most complex and enduring of cultural encounters' Oliver Harris, TLS

Introduction: Shakespeare Enfranchised 1. Gothic Shakespeare: A Monster in the Latin Quarter 2. Prince of Darkness: Foucault's Shakespeare 3. The Management of Mirth: Shakespeare via Bourdieu 4. The Kindly Ones: The Death of the Author in A Midsummer Night's Dream 5. A Bleeding Head Where They Began: Julius Caesar and The Mystical Foundation of Authority 6. Bloody as the Hunter: Twelfth Night and the French Duel 7. When the Cock Crows: The Imminence of Hamlet Epilogue: Making Men of Monsters: Shakespeare in the Company of Strangers