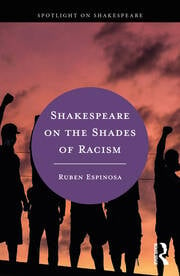 Shakespeare on the Shades of Racism examines Shakespeare in relation to ongoing conversations that interrogate the vulnerability of Black and brown people amid oppressive structures that aim to devalue their worth. By focusing on the way these individuals are racialized, politicized, policed, and often violated in our contemporary world, it casts light on dimensions of Shakespeare’s work that afford us a better understanding of our ethical responsibilities in the face of such brutal racism.

is divided into seven short chapters that cast light on contemporary issues regarding racism in our day. Some salient topics that these chapters address include the murder of unarmed Black men and women, the militarization of the U.S. Mexico border, anti-immigrant laws, exclusionary measures aimed at Syrian refugees, inequities in healthcare and safety for women of color, international trends that promote white nationalism, and the dangers of complicity when it comes to racist paradigms. By bringing these contemporary issues into conversation with a wide range of plays that span the many genres in which Shakespeare wrote throughout his career, these chapters demonstrate how the widespread racism and discord within our present moment stands to infuse with urgent meaning Shakespeare’s attention to the (in)humanity of strangers, the ethics of hospitality, the perils of insularity, abuses of power, and the vulnerability of the political state and its subjects.

The book puts into conversation Shakespeare with present-day events and cultural products surrounding topics of race, ethnicity, xenophobia, immigration, asylum, assimilation, and nationalism as a means of illuminating Shakespeare’s cultural and literary significance to these issues. It should be an essential read for all students of literary studies and Shakespeare.

Introduction: Vulnerable Bodies  1. The Weight of Whiteness  2. What Would Shakespeare Do?  3. All My Pretty Ones?  4. Ain’t I a Woman?  5. Experiences of Expendability  6. The Dangers of Indifference  7. Howl  Afterword: I Can’t Breathe

Ruben Espinosa is Associate Professor of English at the University of Texas, El Paso, USA.