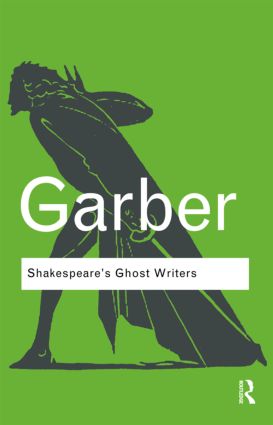 The plays of Shakespeare are filled with ghosts – and ghost writing. Shakespeare's Ghost Writers is an examination of the authorship controversy surrounding Shakespeare: the claim made repeatedly that the plays were ghost written.

Ghosts take the form of absences, erasures, even forgeries and signatures – metaphors extended to include Shakespeare himself and his haunting of us, and in particular theorists such Derrida, Marx, Nietzsche, and Freud – the figure of Shakespeare constantly made and remade by contemporary culture.

Marjorie Garber, one of the most eminent Shakespearean theorists writing today, asks what is at stake in the imputation that "Shakespeare" did not write the plays, and shows that the plays themselves both thematize and theorize that controversy.

This Routledge Classics edition contains a new preface and new chapter by the author.

‘Shakespeare's Ghost Writers is a brave new book, for in justifying another book on Shakespeare, it has attempted nothing less than to make literature newly consequential.’ – Margreta de Grazia, Shakespeare Quarterly

Acknowledgements Preface to the Routledge Classics Edition: Revenant (2010) Preface to the first edition: Ghostlier Demarcations 1. Shakespeare's Ghost Writers 2. Descanting on Deformity: Richard III and the Shape of History 3. A Rome of One's Own 4. Freud's Choice 5. Macbeth: The Male Medusa 6. Hamlet: Giving Up the Ghost 7. A Tale of Three Hamlets, or, Repetition and Revenge Notes Index

Marjorie Garber is William R. Kenan, Jr., Professor of Visual and Environmental Studies and of English at Harvard University. The author of Vested Interests: Cross-Dressing and Cultural Anxiety, she is one of America's leading contemporary writers on Shakespeare and Culture.