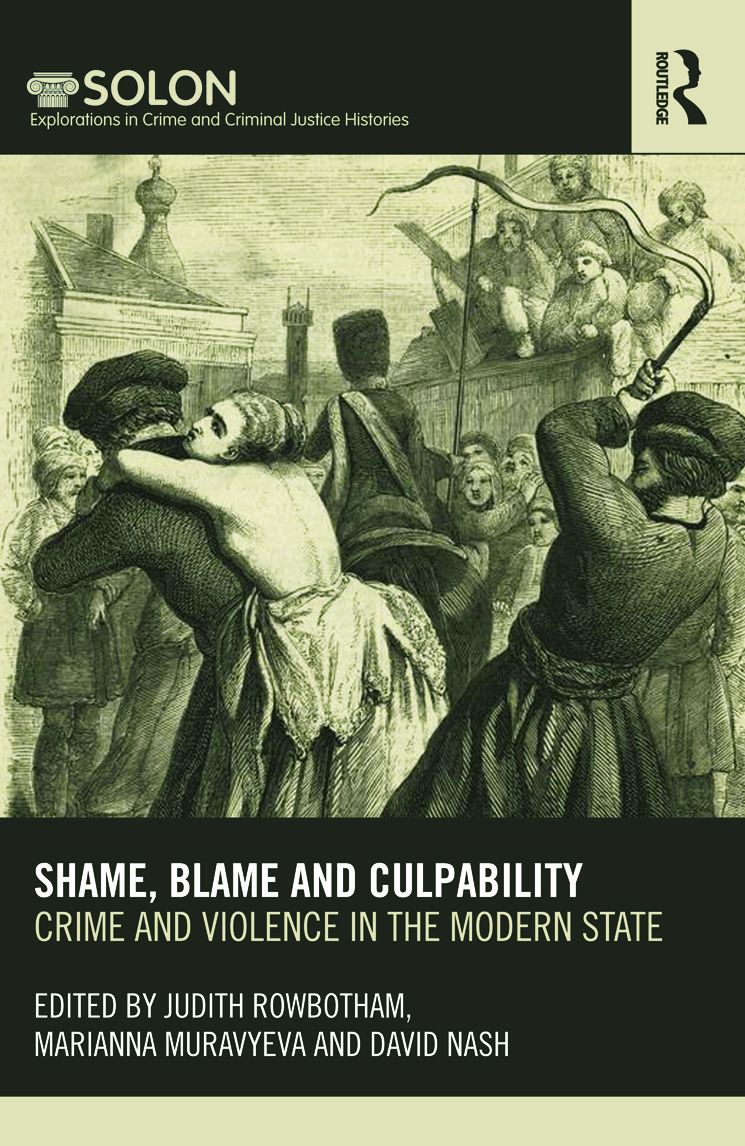 Crime and violence in the modern state, 1st Edition

This ground-breaking collection of research-based chapters addresses the themes of shame, blame and culpability in their historical perspective in the broad area of crime, violence and the modern state, drawing on less familiar territories such as Russia and Greece, not just on material from familiar locations in western Europe. Ranging from the early modern to the late twentieth century, the collection has implications for how we understand punishments imposed by states or the community today.

Shame, blame and culpability is divided into three sections, with a crucial case study part complementing two theoretical parts on shame, and on blame and culpability; exploring the continuance of shaming strategies and examining their interaction with and challenge to 'modern' state-sponsored blaming mechanisms, including allocations of culpability. The collection includes chapters on the deviant body, capital punishment and, of particular interest, Russian case studies, which demonstrate the extent to which the Russian, like the Greek, experience need to be seen as part of a wider European whole when examining ideas and themes.

The volume challenges ideas that shame strategies were largely eradicated in post-Enlightenment western states and societies; showing their survival into the twentieth century as a challenge to state dominance over identification of what constituted 'crime' and also over punishment practices. Shame, blame and culpability will be a key text for students and academics in the fields of criminology and crime, gender or European history.

'…the volume breaks new ground in incorporating eastern and southern Europe (regions rarely considered in English language crime historiography) into a comprehensive European perspective. The editors also deserve praise for emphasising long-term continuities and embedding ‘crime’ within broader phenomena such as forms of community self-policing, religious belief and state development. ‘Shame’, ‘blame’, and ‘culpability’ are unquestionably vital issues, and new light is cast on them in many of these essays.'

'…the contributors to Blame, Shame and Culpability haveclearly put their finger on something important: that shame and the need to apportion blame play important roles in defining and defending forms of social order in very divergent national and chronological contexts, whether in the revenge cultures of local communities, the legalistic mechanisms of state justice systems or the often lurid sensationalism of modern forms of media. The collection raises fascinating and worthwhile questions about the past, and several of its essays suggest valuable ways forward in answering them.'

Foreword Xavier Rousseau Introduction Judith Rowbotham, Marianna Muravyeva and David Nash Part I: Theorizing Shame 1. 'Verguenza, Vergogne, Schande, Skam and Sram': Litigating for Shame and Dishonour in Early Modern Europe Marianna Muravyeva 2. ‘Fama,’ Shame Punishment, and History of Justice in the Sixteenth and Seventeenth Centuries Antonella Bettoni 3. Towards an Agenda for the Wider Study of Shame: Theorizing for Nineteenth Century British Evidence David Nash Part II: Rethinking Blame 4. The Shifting Nature of Blame: Revisiting Issues of Blame, Shame and Culpability in the English Criminal Justice System Judith Rowbotham 5. Guilty Before the Fact? The Deviant Body and the Chimera of ‘Precrime,’ 1877-1939 Neil Davie 6. The ‘Convict Stain’: Desistence in the Penal Colony Barry Godfrey Part III: Issues of Authority: Culpability and the Civilizing Imperative 7. Penance, Compensation, Terror: The Theory and Practice of Captial Punishment in Early Modern France, Paul Friedland 8. Hurt, Harm and Humiliation: Community Responses to Deviant Behaviour in Early Modern Scotland, Anne-Marie Kilday 9. Violence against Honor: Shame and the Crime of Rape in the Age of the Greek Revolution, 1821-1828 Katerini Mousadakou 10. 'Treat them According to the European Tradition': The Discourse of Blaming the Poor, the Problem of Professional Beggars and Attitudes to Poverty in Modern Russia, Julia Barlova 11. Shaming Punishments of Women in Russia in the Nineteenth and Early Twentieth Centuries Natalia Pushkareva 12. Insulting the Russian Royal Family: Crime, Blame and its Sources Boris Kolonitskij 13. Crime and Culpability in the Community, the Newspapers and the Courts: The Case of the Feuding Society of Crete (Greece) Aris Tsantiropoulos General Bibliography

Judith Rowbotham is Director and co-founder of SOLON, the academic network behind the Crime, Violence and the Modern State conference series. She is an Associate Research Fellow at the Institute of Advanced Legal Studies, University of London, and the Legal History co-ordinator for the Society of Legal Scholars annual conference. She is also an experienced editor, with two SOLON collections as well as a number of other edited initiatives behind her. This includes the forthcoming volume, edited with Shani D’Cruze and Efi Avdela: Problems of Crime and Violence in Europe 1750-2000: Essays in Criminal Justice. She is currently working with Kim Stevenson on a monograph on media reportage from the courts, 1850-2000.

Marianna Muravyeva is Associate Professor of Law at Herzen State Pedagogical University of Russia (St. Petersburg) and currently is a fellow at Helsinki Collegium for Advanced Studies, University of Helsinki, working on the project ‘Criminalizing Sexuality in 18th Century Europe’. She is a co-founder of the Russian National Committee of the International Federation of Research in Women’s History and a member of the board. She has also worked as a member of St. Petersburg governmental committee on gender equality and as a policy adviser on protection of women-survivors of domestic abuse and sexual violence for St. Petersburg government and the police.

David Nash is Professor of history at Oxford Brookes University and has worked extensively in the area of blasphemy, blasphemous libel, and religious crime/law for over fifteen years. He is a panel member of the Centre for Legal Research and Policy Studies (Oxford Brookes University) and a member of the Academic Board of the Galleries of Justice Museum of Law Punishment and Policing (Nottingham). His most recent monograph is entitled Blasphemy in the Christian World (2007). He has written numerous articles which have been published in the magazines History Today and BBC History Magazine.