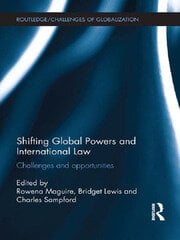 This book explores the impacts of global economic, political and cultural shifts on various international legal frameworks and legal norms.

The economic growth of states throughout Asia, South and Central America and Africa is having a profound effect on the dynamics of international relations, with a resulting impact on the operation and development of international law. This book examines the influence of emerging economies on international legal rules, institutions and processes. It describes recent and predicted changes in economic, political and cultural powers, flowing from the growth of emerging economies such as China, India, Brazil, South Africa and Russia, and analyses the influence of these changes on various legal frameworks and norms. Expert contributors drawn from a variety of fields, including international law, politics, environmental law, human rights, economics and finance, provide a broad analysis of the nature of the shifting global dynamic in its historical and contemporary contexts, and a range of perspectives on the impact of these changes as they relate to specific regimes and issues, including climate change regulation, collective security, indigenous rights, the rights of women and girls, environmental protection and foreign aid and development. The book provides a fresh and comprehensive analysis of an issue with extensive implications for international law and politics.

1. Editors’ Introduction  Part One: Shifting Global Powers  2. Dreams and Nightmares of Alternative Future Powers Charles Sampford  3. Looking back to anticipate the future: International law in the era of the United States Associate Shirley Scott  4. A Lament for a Lost Decade of Human Rights Ramesh Thakur  Part Two: Challenges in the New World Order: evaluating existing regimes  5. Shifting global power and international climate governance Rowena Maguire  6. Liberalisation of Education Services: Implication for Education as Human Right from the Perspective of Developing Countries Shawkat Alam  7. Shifting State Power: Re-mapping indigenous sovereignties Anthony McAvoy and Marcelle Burns  8. The Australian Constitution and the Paradigm Shift in the Global Construct: Can a 19th Constitution Cope with 21st Century Chaos? Lt Gen John Sanderson AC (ret)  Part Three: Shifting values and emerging norms  9. The Role of the International Criminal Court and Rome Statute in International Criminal Justice Standard Setting: Some Reflections Rahmet Mohamad  10. The influence of constitutional reform in the developing world on the emergence of a customary right to a healthy environment Bridget Lewis  11. Recent Developments in the law and practice of female genital mutilation: could an absolute human right emerge Ben Matthews  12. China, R2P and the principle of non-intervention: assessing the implications of the Libyan crisis Andrew Garwood-Gowers  13. The Rise of China and Its Impact on, and Relation to, International Economic Law Ross Buckley  14. A tale of two projects: human rights accountability in development projects Adam McBeth

Rowena Maguire is a Lecturer in the School of Law at the Queensland University of Technology, Australia, and a research affiliate at the Cambridge Climate Change Centre for Mitigation Research, UK.

Bridget Lewis is a Lecturer in international law at the Queensland University of Technology, Australia.

Charles Sampford is a Professor and Foundation Dean of Law at Griffith University, Australia. He is also Director of the Institute for Ethics, Governance and Law, a joint initiative with the United Nations University, Griffith, QUT, ANU, Jindal Global University and the Center for Asian Integrity in Manila.