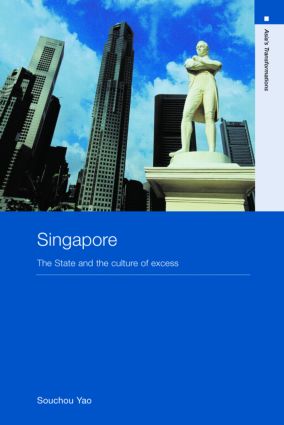 The State and the Culture of Excess, 1st Edition

Taking ideas and frameworks from philosophy, psychology, political science, cultural studies and anthropology, this book tells the larger ‘truth’ about the Singapore state. This book argues that this strong hegemonic state achieves effective rule not just from repressive policies but also through a combination of efficient government, good standard of living, tough official measures and popular compliance.

Lively, and well-written, this book discusses key subject areas such as:

'Yao masterfully unfolds the magic of the Singapore state, giving details of the desires and works of its magician- statesman and the dreams and fallibilities of the citizen - audience in a narrative worthy of a cinematic classic' - Daniel PS Goh, National University of Singapore, Singapore

'This is a skilfully written, wide-ranging, and well-organized book whose author has effortlessly assembled a disciplinary eclectic analytical toolkit to produce some of the most interesting, insightful, refreshing, and (unexpectedly) accessible interpretations of contemporary politics in Singapore. The analysis is often very personal and the prose is lively, making this a book that should not only be on scholarly reading lists, but one that will also appeal to intelligent non-academic readers hungry for alternative and innovative ways to explain politics in Singapore' - Kenneth Paul Tan, Sojourn, October 2008

'The broad, thematic analysis, which is clearly the main focus of Yao's efforts, is eclectic, stimulating and rewarding' - Michael D. Barr, Journal of Contemporary Asia, February 2009

Souchou Yao is Senior Lecturer in Anthropology at the University of Sydney. He has published widely in international journals and is the author of Confucian Capitalism: discourse, practice and the myth of Chinese enterprise.