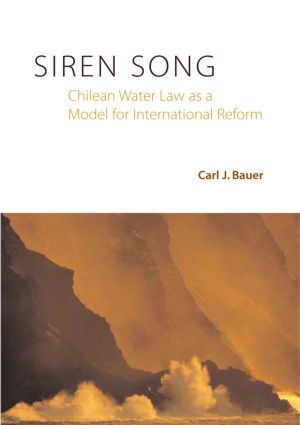 Increasing scarcity, conflict, and environmental damage are critical features of the global water crisis. As governments, international organizations, NGOs, and corporations have tried to respond, Chilean water law has seemed an attractive alternative to older legislative and regulatory approaches. Boldly introduced in 1981, the Chilean model is the worlds leading example of a free market approach to water law, water rights, and water resource management. Despite more than a decade of international debate, however, a comprehensive, balanced account of the Chilean experience has been unavailable. Siren Song is an interdisciplinary analysis combining law, political economy, and geography. Carl Bauer places the Chilean model of water law in international context by reviewing the contemporary debate about water economics and policy reform. He follows with an account of the Chilean experience, drawing on primary and secondary sources in Spanish and English, including interviews with key people in Chile. He presents the debate about reforming the law after Chile‘s 1990 return to democratic government, as well as emerging views about how water markets have worked in practice. The resulting book provides insights about law, economics, and public policy within Chile and lessons for the countries around the world that are wrestling with the challenges of water policy reform.

'Timely . . . an impressive, in-depth understanding and thorough analysis of what has been happening in Chile and why.' Ken Conca, University of Maryland 'A valuable study. It highlights the global view of water issues and international water entities and emphasizes the importance of institutions first, then markets.' Charles W. Howe, University of Colorado at Boulder

Carl Bauer is a fellow at Resources for the Future. He works in the areas of comparative water law, policy, and management in Latin America and the United States, with a focus on political economy and property rights. Bauer has been a lecturer and post-doctoral researcher in environmental studies at the University of California Berkeley, as well as a visiting professor and Fulbright Scholar at universities in Chile and Argentina. He has been a consultant for the United Nations, the Global Water Partnership, the World Bank, the Inter-American Development Bank, and other international organizations on matters of water rights, water markets, and economic instruments for water resources management. Bauer‘s previous book was Against the Current: Privatization, Water Markets, and the State in Chile, which has also been published in Spanish. His current research examines the impacts of electricity deregulation on river basin management in South America and tries to bridge the gap between lawyers, economists, and geographers in environmental regulation.