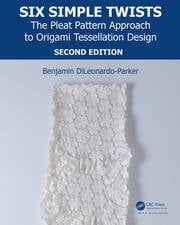 This new edition of Six Simple Twists: The Pleat Pattern Approach to Origami Tessellation Design introduces an innovative pleat pattern technique for origami designs that is easily accessible to anyone who enjoys the geometry of paper. The book begins with six basic forms meant to ease the reader into the style, and then systematically scaffolds the instructions to build a strong understanding of the techniques, leading to instructions on a limitless number of patterns. It then describes a process of designing additional building blocks. At the end, what emerges is a fascinating artform that will enrich folders for many years. Unlike standard, project-based origami books, Six Simple Twists focuses on how to design, rather than construct.

In this thoroughly updated second edition, the book explores new techniques and example tessellations, with full-page images, and mathematical analysis of the patterns. A reader will, through practice, gain the ability to create still more complex and fascinating designs.

Outside of art, Ben teaches high school mathematics to students with uncommon learning styles, and incorporates origami into his classes as often as he can. Ben approaches his artwork from a holistic standpoint, preferring to view origami as an entry into the vast network of disciplines to which it is connected. This has led him to extend his knowledge of education, engineering, mathematics, CNC fabrication, paper arts, fashion, alternative photography, and other studies. When not teaching high school math, Ben operates a workshop in Essex, CT out of which he creates artwork and runs classes on origami design,

He views his practice of origami as cyclical and recursive. Origami is connected to such as vast network of disciplines, each with its own siren’s call. Each flavor, each culture, cycles back onto its own basics over and over, swirling and interacting with previous knowledge, each enhancing the others in some way.

"The second edition of Six Simple Twists is a marvelous expansion of the original; like the first edition it provides an introduction to the vast, wide world of origami twist tessellations, with a focus on those based on a hexagonal grid. Through copious and detailed photographs, he shows not just the structure, but how individual folds are actuated, and then how they may be combined in beautiful ways. An expanded selection of photographs of works by worldwide artists provides both inspiration and challenge for the budding tessellator and experienced artist alike."