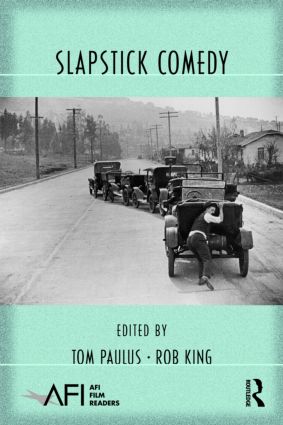 From Chaplin’s tramp to the Bathing Beauties, from madcap chases to skyscraper perils, slapstick comedy supplied many of the most enduring icons of American cinema in the silent era. This collection of fourteen essays by prominent film scholars challenges longstanding critical dogma and offers new conceptual frameworks for thinking about silent comedy’s place in film history and American culture. The contributors discuss a broad range of topics including the contested theatrical or cinematic origins of slapstick; the comic spectacle of crazy technology and trick stunts; the filmmakers who shaped the style of early slapstick; and comedy’s implications for theories of film form and spectatorship.

This volume is essential reading for anyone seeking to understand the origins and continued importance of a film genre at the heart of American cinema from its earliest days to today.

Part One: Originality and Adaptation

1. The Good Thieves: On the Origins of Situation Comedy in the British Music Hall Bryony Dixon

7. "Uproarious Inventions": The Keystone Film Company, Modernity, and the Art of the Motor Rob King

8.Mechanisms of Laughter: The Devices of Slapstick Tom Gunning

13. Back to the "Slap": Slapstick’s Hyperbolic Gesture and the Rhetoric of Violence Muriel Andrin

14. The Art of Imitation: The Originality of Charlie Chaplin and Other Moving-Image Myths Jennifer M. Bean

TOM PAULUS is Assistant Professor in Cinema and Theater Studies at the University of Antwerp and the organizer of "(Another) Slapstick Symposium."

ROB KING is Assistant Professor in Cinema Studies and History at the University of Toronto and the author of The Fun Factory: The Keystone Film Company and the Emergence of Mass Culture (2009).

AFI Film Readers, published in cooperation with the American Film Institute, focus on important issues and themes in film and media scholarship.