Slavery, Geography and Empire in Nineteenth-Century Marine Landscapes of Montreal and Jamaica 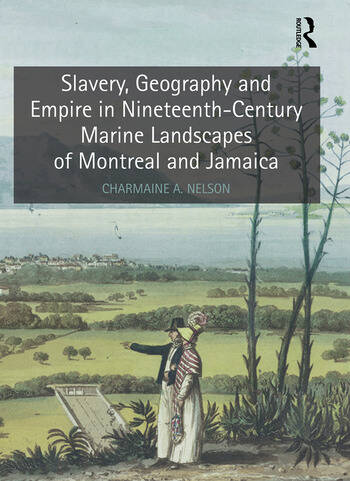 Slavery, Geography and Empire in Nineteenth-Century Marine Landscapes of Montreal and Jamaica

Slavery, Geography and Empire in Nineteenth-Century Marine Landscapes of Montreal and Jamaica is among the first Slavery Studies books - and the first in Art History - to juxtapose temperate and tropical slavery. Charmaine A. Nelson explores the central role of geography and its racialized representation as landscape art in imperial conquest. One could easily assume that nineteenth-century Montreal and Jamaica were worlds apart, but through her astute examination of marine landscape art, the author re-connects these two significant British island colonies, sites of colonial ports with profound economic and military value. Through an analysis of prints, illustrated travel books, and maps, the author exposes the fallacy of their disconnection, arguing instead that the separation of these colonies was a retroactive fabrication designed in part to rid Canada of its deeply colonial history as an integral part of Britain's global trading network which enriched the motherland through extensive trade in crops produced by enslaved workers on tropical plantations. The first study to explore James Hakewill's Jamaican landscapes and William Clark's Antiguan genre studies in depth, it also examines the Montreal landscapes of artists including Thomas Davies, Robert Sproule, George Heriot and James Duncan. Breaking new ground, Nelson reveals how gender and race mediated the aesthetic and scientific access of such - mainly white, male - artists. She analyzes this moment of deep political crisis for British slave owners (between the end of the slave trade in 1807 and complete abolition in 1833) who employed visual culture to imagine spaces free of conflict and to alleviate their pervasive anxiety about slave resistance. Nelson explores how vision and cartographic knowledge translated into authority, which allowed colonizers to 'civilize' the terrains of the so-called New World, while belying the oppression of slavery and indigenous displacement.

Slavery studies and its absences

Contesting the erasure of black Canada and Canadian slavery

The case of two islands: Comparing Montreal and Jamaica

1 Colonialism and art: Landscape and empire

2 A tale of two empires: Montreal slavery under the French and the British

A transition of power: From French to British slavery

Adapting slavery under the British

The face of slave ownership in Montreal: James McGill

3 Representing the enslaved African in Montreal

Geographical alienation and the hierarchy of enslavement

Marie-Thérèse-Zémire, revolutionary St. Domingue, and the politics of flight

The conditions of African enslavement in eighteenth-century Montreal and St. Domingue

Life after François: "Portrait" of a Montreal slave mistress

Minuets of the Canadians

Re-Imagining Montreal as a Colonial Trade and Slave Port

The picturesque and Beckford’s debt to European landscape (painting)

6 Imaging slavery in Antigua and Jamaica: Pro-slavery discourse and the reality of enslavement

The tropical picturesque as pro-slavery discourse

The price of excess: white male promiscuity and the spread of venereal disease

The state of Jamaican slavery

"I am the Only Woman": Politeness and the erasure of black and coloured women

8 Beyond Sugar: James Hakewill’s vision of Jamaican settlements, livestock pens, and the spaces between

The limits of mobility and the pervasiveness of surveillance: Exploring wainage

"Other" whites: Representing British soldiers in the Caribbean

Conclusion: Deception in the life and art of the white Jamaican creole planter class

'Charmaine A. Nelson's compelling and innovative reading of British Caribbean marine landscapes in Montreal and Jamaica (1760-1820) expands slavery studies and the visual culture of slavery to consider for the first time a second Middle Passage between the Caribbean and Canada. She thus expands the traditional slave trade triangle to now include Great Britain, the West Indies, and Canada. Her erudite and rich analysis of visual culture combined with postcolonial feminist theory is a major contribution to readers in a myriad of fields.'

'Charmaine Nelson's keen analysis reveals her sharp intellect as she addresses the realities of racism in Canada and the Caribbean: the absences, the distortions and the erasures that stifled black voices suffering the opprobrium of slavery. Canada somehow, willfully, disappeared from Atlantic slavery, from the shameful, painful collective history that encompassed all of us. This is a "big book", and though its focus is visual arts, it is multidisciplinary and universal in its scope.'

'Slavery, Geography and Empire in Nineteenth-Century Marine Landscapes of Montreal and Jamaica is a deeply researched and complex book. ...[Nelson's] comparative project signals her position as scholarly activist and practitioner of a hybrid art history that incorporates a close attending to the visuals, a concern for what is seen and not seen, and a self-reflexivity concerning how the author positions herself. Throughout the book, one senses her outrage and indictment of the slavery complex as well as her commitment to telling a new story about the visualization and imaginings of slavery, geography, and empire in the nineteenth-century colonial world of Montreal and Jamaica.'

'In this prolific and compelling study, Nelson draws from an impressive body of visual and textual sources to argue for a deeply entrenched set of geopolitical, commercial, and social connectivities between two key colonial ports of the British Atlantic....Nelson’s study works to interrupt dominant narratives of place and nationhood, and its address to an expansive range of geographies, images, texts, and histories should provide myriad openings for future studies on slavery and empire across disciplines.'