Social Analysis and the COVID-19 Crisis
A Collective Journal 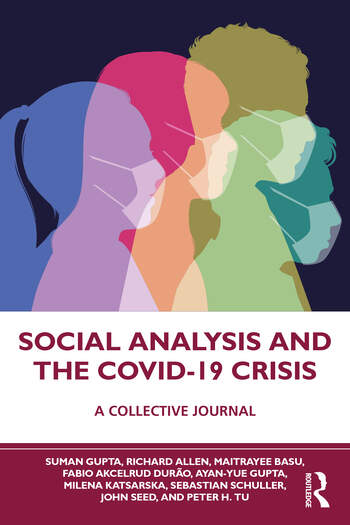 Social Analysis and the COVID-19 Crisis: A Collective Journal

This book is a collective journal of the COVID-19 pandemic. With first-hand accounts of the pandemic as it unfolded, it explores the social and the political through the lens of the outbreak. Featuring contributors located in India, the USA, Brazil, the UK, Germany, and Bulgaria, the book presents us with simultaneous, multiple histories of our time.

The volume documents the beginning of social distancing and lockdown measures adopted by countries around the word and analyses how these bore upon prevailing social conditions in specific locations. It presents the authors’ personal observations in a lucid conversational style as they reflect on themes such as the reorganization of political debates and issues, the experience of the marginalized, theodicy, government policy responses, and shifts into digital space under lockdown, all of these under an overarching narrative of the healthcare and economic crisis facing the world.

A unique and engaging contribution, this book will be useful to students and researchers of sociology, public health, political economy, public policy, and comparative politics. It will also appeal to general readers interested in pandemic literature.

Introduction 1. Contagion and Questions 2. Social Distancing 3. Lockdown 4. Suspension of Politics 5. Of Protests 6. The Poor and the Way Out 7. Religion 8. Exception and Emergency 9. Real and Digital Space 10. Tax the Rich

Suman Gupta is Professor of Literature and Cultural History at the Open University, UK. He has led international collaborations across 13 countries, and has published 16 monographs, 10 edited volumes and around 80 scholarly papers. His most recent publications include, Digital India and the Poor: Policy, Technology and Society (2020) and What Is AI?: A Conversation between an AI Engineer and a Humanities Researcher (co-authored with Peter H. Tu, 2020).

is Emeritus Professor of English at The Open University, UK. He was Dean of Arts from 2000 to 2007, and served as an assessor for the UK national Quality Assurance Agency from 2008 to 2016. His career thus combined teaching and research, institutional policy and innovation, management, and Quality Assurance. His academic interests regularly involve collaboration; with Harish Trivedi he wrote and edited Literature and Nation: Britain and India 1800-1990 (2000), and with Suman Gupta and others he led a research project, the findings published as Reconsidering English Studies in Indian Higher Education (2015).

is Lecturer in Communications and Media at the University of the Arts (UAL), London, UK. Her current research is in the field of digital media cultures, digital identities and political contestations, and digital research methods. Before joining UAL she did her doctoral research on representations of Indian marginalised subjects within new journalistic discourses in India. Her first article titled 'Representing 'the other India' in transnational public spaces' is forthcoming in a special issue of the journal Reserches en Communication.

is Professor of Literary Theory at the State University of Campinas (Unicamp), Brazil. He is the author of Modernism and Coherence (Peter Lang, 2008), Teoria (literária) americana (2011), Fragmentos Reunidos (2015) and Metodologia de Pesquisa em Literatura (2020), among others. His research interests include the Frankfurt School, Anglo-American modernism and Brazilian critical theory.

has a BA(Hons) in Art History and Philosophy from the University of Leeds, UK, and a Master’s in Art from the Slade UCL, and is currently a PhD Sociology student at the University of Bristol, UK. His research: 1) explores ways of improving discourse analysis by drawing upon the philosophy of language, and by combining close reading with algorithmic methods taken from natural language processing; 2) applies the results of this exploration to the area of British government policy making, especially in the Department for Digital, Culture, Media and Sport. He has published a co-authored paper in Policy Studies. He is also a practicing artist.

Milena Katsarska is Senior Lecturer in American Literature and Culture Studies at the Paisii Hilendarski University of Plovdiv, Bulgaria. Her publications are in culture studies, the politics of cultural translation, the history, sociology and politics of institutional academic spaces, and English and American studies in Bulgaria. Recent publications include the co-authored volume Usurping Suicide: The Political Resonances of Individual Deaths (2017). She is presently finalizing a book-length study on the prefatorial discourse surrounding American literature in the socialist context of Bulgaria, Parapositions: Prefacing American Literature in Bulgarian Translation 1948-1998 (forthcoming).

graduated in Comparative Literature from Ludwig Maximilian University of Munich, Germany, and currently holds a PhD scholarship of Studienstiftung des deutschen Volkes while working on materialist literary theory in the age of globalization. His fields of research include postcolonial studies, globalization theory, Hip-Hop studies, Bertolt Brecht and the aesthetics of Marxism. Schuller has published papers on Brecht and Gisela Elsner ("The Acid of the Materialist Notion of History", Brecht Yearbook 43/2018), the relationship of Marxism and literary theory, German Hip-Hop, and has edited an anthology on the rise of the Alt-Right in Germany, Die Zeit der Monster (2018).

taught at the University of Roehampton, UK. His research was mostly on 18th and 19th British social history and publications include Dissenting Histories: Religious Division and the Politics of Memory in Eighteenth-Century England (2008), and The Gordon Riots: Politics, Culture and Insurrection in Late Eighteenth-Century Britain, co-edited with Ian Haywood, (2012). He is also the author of Marx: A Guide for the Perplexed (2010). He has been a member of the editorial board of Social History since 1982, was review editor 1982-1994 and associate editor 2010-13.

received his Bachelor of Science degree in 1990 for Systems Design Engineering from the University of Waterloo, Canada. He then earned his doctorate in 1995 from Oxford University’s Engineering Science department. In 1997, Tu joined the General Electric Research Center. He is currently GE’s Chief Scientist for Artificial Intelligence. He has developed various forensic algorithms for the FBI. In addition, he has been the Principle Investigator for the National Institute of Justice, Department of Homeland Security and the Defense Advanced Research Program Agency. Tu has 50 issued patents and over 75 peer-reviewed publications.