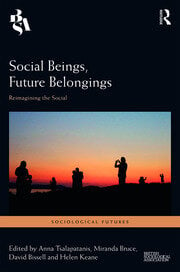 Social Beings, Future Belongings is a collection of sociological essays that address an increasingly relevant matter: what does belonging look like in the twenty-first century? The book critically explores the concept of belonging and how it can respond to contemporary problems in not only the traditional domains of citizenship and migration, but also in detention practices, queer and feminist politics, Australian literature and fashion, technology, housing and rituals.

Drawing on examples from Australia, Europe, the United Kingdom and the United States, each topic is examined as a different kind of problem for the future – as a toil, an intensity or a promise. Ultimately, the collection argues that creating new ways to belong in contemporary times means reimagining the traditional terms on which belonging can happen, as well as the social itself. Read on their own, each chapter presents a compelling case study and develops a set of critical tools for encountering the empirical, epistemological and ontological challenges we face today. Read together, they present a diverse imagination that is capable of answering the question of belonging in, to and with the future.

shows how belonging is not a static and universal state, but a contingent, emergent and ongoing future-oriented set of practices. Balancing empirical and theoretical work, this book will appeal to researchers, students and practitioners alike.

Belonging Unbound  Part I: Toils  1. Naming Belonging: When National Vocabularies Fail  2. ‘Their Time and Their Story’: Inscribing Belonging Through Life Narratives and Role Expectations in Wedding Videography  3. Academics Anonymous: Blogging and Feminist ‘Be/longings’ in the Neoliberal University  Part II: Intensities  4. Transforming Belongings in Guantanamo Bay  5. Belonging in the Future?  6. Costumes of Belonging: ‘Fitting in’ circus fabrics in the novels The Unusual Life of Tristan Smith by Peter Carey and The Pilo Family Circus by Will Elliott, and the costume-cum-body art of Leigh Bowery  Part III: Promises  7. Beyond Human (Un)Belonging: Intimacies and the Impersonal in Black Mirror  8. Belonging, Place and Identity in the 21st Century  9. Femininity isn't Femme: Appearance and the Contradictory Space of Queer Femme Belonging

Anna Tsalapatanis is a Postdoctoral Researcher at the Centre for Socio-Legal Studies at the University of Oxford. She received her PhD in Sociology from the Australian National University and her research interests include citizenship as status, bureaucracy and identity.

is a PhD candidate in the School of Sociology at the Australian National University, writing on the 'Internet of Things: its history, discourse, logic, and implications for how we understand time, technology and the future'. She has published in the Australian Humanities Review and developed and convened advanced university courses.

is an Associate Professor and Australian Research Council Future Fellow in the School of Geography at the University of Melbourne. He is author of Transit Life: How Commuting is Transforming our Cities (2018), and co-editor of Stillness in a Mobile World (2011) and the Routledge Handbook of Mobilities (2014).

is an Associate Professor in the School of Sociology at the Australian National University in Canberra, Australia. Her research focuses on drug and alcohol use, including pharmaceutical, recreational and illicit drugs (and the relationships between these categories and forms of use). She is the co-author of Habits: Remaking Addiction (2014) with Suzanne Fraser and David Moore.