Social Control and Self-Control Theories of Crime and Deviance 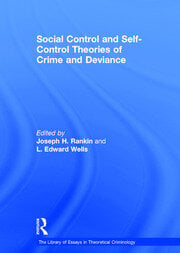 Social Control and Self-Control Theories of Crime and Deviance

Control theories have dominated criminological theory and research since the 1969 publication of Hirschi's seminal work on the social bond. Social control and self-control theorists are unique in suggesting that patterns in criminal behaviors are better explained by variations in social constraints rather than by individual motivational impulses, thus indicating that their main concerns are the explication and clarification of the techniques, processes, and institutions of informal social control. The four major sections of this volume focus on: the similarities and differences among the major contributors to the early developmental stage of social control theory; the central importance of parents, peers, and schools in the creation of informal control mechanisms and their link to crime and delinquency; the theoretical underpinnings of self-control theory, including empirical tests and criticisms; and theoretical integrations of social control and self-control theories with various motivational theories of crime and delinquency.