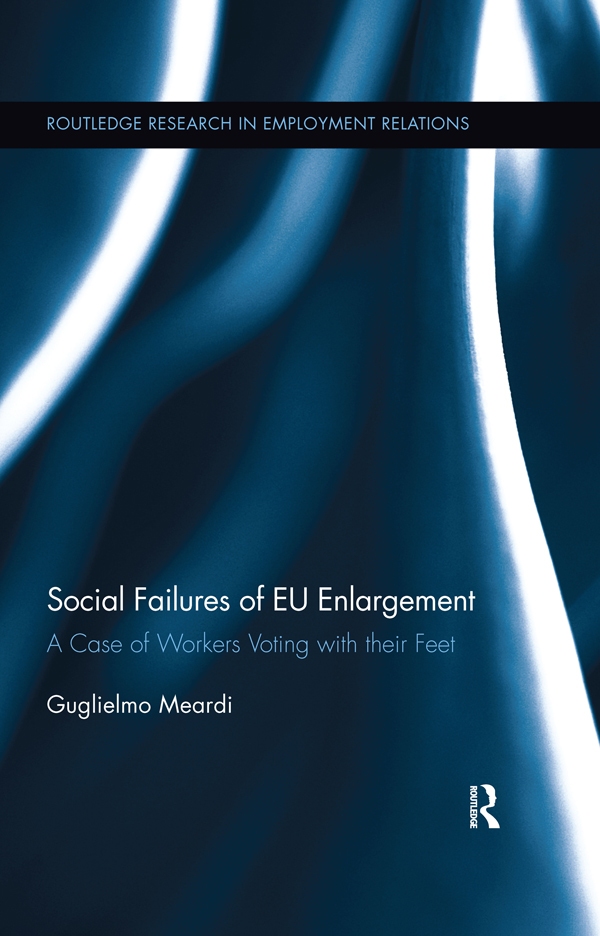 A Case of Workers Voting with their Feet, 1st Edition

Is the EU enlargement the success EU institutions proclaim? Based on fifteen years of fieldwork research across Central and Eastern Europe and on migrants in the UK and Germany, this book provides a less glittering answer. The EU has betrayed hopes of social cohesion: social regulations have been forgotten, multinationals use threats of relocations, and workers, left without institutional channels to voice their concerns, have reacted by leaving their countries en masse. Yet migration, for many, increases social vulnerability.

Drawing on Hirschman’s concepts of ‘Exit’ and ‘Voice’, the book traces the origins of such failures in the management of EU enlargement as a pure economic and market-creating exercise, neglecting the inherently political nature of labour relations. The reinforcement of market mechanisms without political counterbalances has resulted in an increase in opportunistic ‘exit’ behaviour by both employers and employees, and thereby in a worsening quality of democracy, at workplace, national and European levels. As a result of this process, the EU has become more similar to the North American Free Trade Agreement between USA, Canada and Mexico, where social rights are marginalized and economic integration does not translate into better development.

‘Meardi has written a truly informative book about European integration. Based on fifteen years of research and a deep knowledge of Central and Eastern European countries, he covers such issues as human resource management in multinationals, the revitalization of unions, the causes and effects of labor migration. He succeeds in demolishing the illusion that Europe has liberalized its economy while protecting its societies, without succumbing to reactionary Euro-skepticism. Students and researchers alike will benefit from this book.’ – Ian Greer, Leeds University

‘The volume presents a profound, fairly detailed and concise, up dated, so far non-existing overview of heterogeneous dimensions of EU enlargement - and its fundamental social failures. It constitutes the ideal companion of the few available introductory textbooks dealing mainly with industrial and/or employment relations in the old EU member states. It has to be highly recommended for all practitioners as well as scholars who are interested in European integration in general and its consequences for industrial relations in particular.’ – Berndt Keller, University of Konstanz, Germany

‘In this excellent book, Guglielmo Meardi offers a compelling analysis of the social failures of the EU enlargement to the East. He argues that EU enlargement did not establish a capitalist paradise despite the betrayal of labor’s expectations. The exodus of eastern workers to the west, the rise of political populism, the low organizational loyalty of eastern workers towards their new masters, and occasional local, national, and transnational trade union action has forced governments and multinationals corporations to temper their neoliberal policies towards labor.’ – Roland Erne, University College Dublin

‘Meardi has written a compelling book that deserves wide attention. It is well grounded in case studies and an extensive knowledge of industrial relations in the new member states of the EU. But it also makes a powerful argument that the consequences of labor’s limited voice in these societies extends well beyond the confines of the workplace, and also impacts labor migration, social policy, as well as the quality of capitalism and democracy in the region, in indeed throughout the European Union. Anyone interested in these issues would do well to read this book.’ – Stephen Crowely, Oberlin College, USA

'An excellent book that addresses critically and engagingly many of the preconceptions surrounding the eastern enlargement of the European Union.' - Dorothee Bohle, Central European University, Hungary

Aspects of the employment relationship are central to numerous courses at both undergraduate and postgraduate level. Drawing from insights from industrial relations, human resource management and industrial sociology, this series provides an alternative source of research-based materials and texts, reviewing key developments in employment research. Books published in this series are works of high academic merit, drawn from a wide range of academic studies in the social sciences.