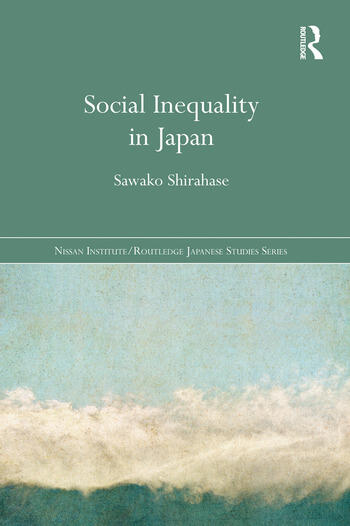 Japan was the first Asian country to become a mature industrial society, and throughout the 1970s and the 1980s, was viewed as an ‘all-middle-class society’. However since the 1990s there have been growing doubts as to the real degree of social equality in Japan, particularly in the context of dramatic demographic shifts as the population ages whilst fertility levels continue to fall.

This book compares Japan with America, Britain, Italy, France, Germany, Sweden and Taiwan in order to determine whether inequality really is a social problem in Japan. With a focus on impact demographic shifts, Sawako Shirahase examines female labour market participation, income inequality among households with children, the state of the family, generational change, single person households and income distribution among the aged, and asks whether increasing inequality and is uniquely Japanese, or if it is a social problem common across all of the societies included in this study. Crucially, this book shows that Japan is distinctive not in terms of the degree of inequality in the society, but rather, in how acutely inequality is perceived. Further, the data shows that Japan differs from the other countries examined in terms of the gender gap in both the labour market and the family, and in inequality among single-person households – single men and women, including lifelong bachelors and spinsters – and also among single parent households, who pay a heavy price for having deviated from the expected pattern of life in Japan.

Drawing on extensive empirical data, this book will be of great interest to students and scholars interested in Japanese culture and society, Japanese studies and social policy more generally.

Introduction: Japan Compared 1. Japan: How Much Inequality? 2. Female Labor Force Participation and Economic Inequality 3. Economic Inequality among Families with Children 4. Youngsters who Won’t Leave the Nest 5. Mothers Going Out to Work: Perceptions, Attitudes and their Institutional Background 6. Where Do Old People Live?: Ageing and Household Structure 7. Old People Living Alone and Those in Three-generation 8. Conclusion: Life Course and Inequality

Sawako Shirahase is Professor in the Department of Sociology at the University of Tokyo, Japan.

"Shirahase's focus on recent demographic shifts, particularly female labor force participation and the aging of the population, is quite detailed and valuable for scholars. Summing Up: Recommended." – L.Miller, University of Missouri-St. Louis in CHOICE