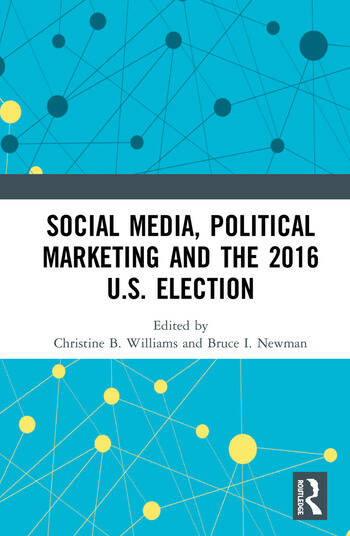 Facebook, Twitter and Instagram create new ways to market political campaigns and new channels for candidates and voters to interact. This volume investigates the role and impact of social media in the 2016 U.S. election, focusing specifically on the presidential nominating contest. Through case studies, survey research and content analysis, the researchers employ both human and machine coding to analyse social media text and video content. Together, these illustrate the wide variety of methodological approaches and statistical techniques that can be used to probe the rich, vast stores of social media data now available. Individual chapters examine what different candidates posted about and which posts generated more of a response. The analyses shed light on what social media can reveal about campaign messaging strategies and explore the linkages between social media content and their audiences’ perceptions, opinions and political participation. The findings highlight similarities and differences among candidates and consider how continuity and change are manifest in the 2016 election. Finally, taking a look forward, the contributors consider the implications of their work for political marketing research and practice.

The chapters in this book were originally published as a special issue of the Journal of Political Marketing.

4. The Image is the Message: Instagram Marketing and the 2016 Presidential Primary Season
Caroline Lego Muñoz and Terri L. Towner

5. Appeals to the Hispanic Demographic: Targeting through Facebook Autoplay Videos by the Clinton Campaign during the 2015/2016 Presidential Primaries
Edward Elder and Justin B. Phillips

6. Populism and Connectivism: An Analysis of the Sanders and Trump Nomination Campaigns
Michael J. Jensen and Henrik P. Bang

Christine B. Williams is Professor of Political Science at Bentley University, USA, and holds a MA and PhD from Indiana University, USA. She is North American Managing Editor at the Journal of Political Marketing and serves on editorial boards for several other journals. Her publications focus on political communication, specifically new and emerging technologies and e-government.

Bruce I. Newman is Professor of Marketing as well as the Wicklander Fellow in Business Ethics at DePaul University, USA. He is one of the world's leading experts in political marketing and combines an expertise in marketing and politics with his knowledge of consumer psychology and statistical applications. He is the founding editor-in-chief of the Journal of Political Marketing. He has published more than 15 books and numerous articles on the subjects of political marketing and consumer psychology.