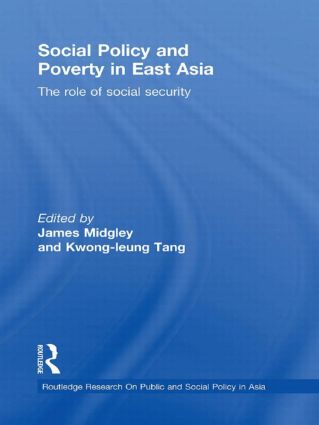 This book looks at the role of social policy and particularly social security in addressing the ongoing challenge of poverty in East Asia despite the region’s spectacular experience of economic growth in decent decades. The East Asian miracle resulted over the last four decades in a transformation of the region’s traditional agrarian economies and significant increases in standards of living for many ordinary people. Even though it was given little attention, poverty has remained an ongoing problem. The problem became particularly evident however with the Asian financial crisis of 1997 when many low income and middle class workers became unemployed. As a result of this crisis, the need for effective social policies and social security programs were recognized. The idea that economic growth would solve the problem of poverty was increasingly challenged. Even in China today, where rapid growth has created new employment opportunities and the promise of prosperity for many, the government has recognized that the problem of poverty cannot be addressed only through economic growth but that comprehensive social policies must be formulated, and this includes the development of an effective security system.

James Midgley is the Harry and Riva Specht Professor of Public Social Services and Dean Emeritus at the School of Social Welfare at the University of California, Berkeley.

Routledge Research On Public and Social Policy in Asia

The Routledge Research on Public and Social Policy in Asia Series publishes quality manuscripts on contemporary public policy issues by scholars in Public Administration, Public Management, and Public Policy as well as Economics, Geography, Political Science, Social Work, and Sociology. There are no limitations regarding policy sectors that may be included in the Series, provided the manuscript deals with significant public policy issues with broad appeal.

The Series is advised by an international Editorial Board and edited by M Ramesh of the University of Hong Kong.