Social Science of the Syringe
A Sociology of Injecting Drug Use 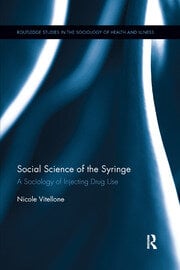 Social Science of the Syringe: A Sociology of Injecting Drug Use

This book addresses the history of harm reduction. It evaluates the consequences and constraints, stakes and costs of the policy of needle exchange for the purposes of harm prevention and health research. Vitellone situates the syringe at the centre of empirical research and theoretical analysis, challenging existing accounts of drug injecting which treat the syringe as a dead device that simply facilitates social action between humans. Instead, this book complicates the relationship between human and object – injecting drug user and syringe – to ask what happens if we see the object as an intra-active part of the sociality that constitutes injecting practices. And what kinds of methods are required to generate a social science of the syringe that is able to measure injecting sociality?

Social Science of the Syringe

develops material methodologies and epistemologies of injecting drug use to enact the syringe as an object of intellectual inquiry. It draws on the methodologies of social anthropology, Actor-Network-Theory, Deleuze’s empiricism and new feminist materialism to move towards materially-engaged knowledge production. This interdisciplinary approach improves understandings of the causes and effects of injecting behaviour and the problem of needle sharing, as well as providing a more robust empirical framework to evaluate the motivations and consequences of drug use and drug policy. This book will appeal to researchers and students interested in the sociology of health and illness, STS, Actor-Network Theory, empirical sociology, medical anthropology, social and cultural anthropology, addiction theory and harm reduction.

Nicole Vitellone is AF Warr Senior Lecturer in Sociology in the School of Sociology, Social Policy and Criminology at the University of Liverpool, UK.

What can the syringe tell us? In this ground-breaking and beautifully written book Nicole Vitellone takes the object as her starting point and produces a stunningly original account of drug use, harm reduction, and the social scientific knowledge focused on these phenomena. Social Science of the Syringe is a vitally important work – it not only demonstrates the power of materialist approaches to drug use and drug policy, it models a new kind of empirical engagement with the social world.

Drug policy, research and practice has long focused on the human subjects of drug use, despite all that is known about the array of nonhuman forces involved in any event of drug consumption. Nicole Vitellone’s compelling new book offers a series of finely grained reassessments of this imbalance. Introducing a host of novel spaces, forces and materialities to discussions of harm reduction, Vitellone offers a powerful new vision for drug policy, and a powerful repudiation of the suffering such policy needlessly extends. Finally with this timely new book, we have a glimpse of what the next generation of harm reduction policies might entail.

In Vitellone’s erudite ethnographic analysis the syringe becomes an exemplary case for following the object to explore and interrogate the multiple perspectives that make up the figure of the injecting drug user as a critical site of contemporary biopolitics.  The book counters analyses of the shifts in cultural, political and public health discourse that identify harm reduction and needle exchange either as movement from social responsibility for addicts as psychologically ill to drug injectors as neoliberal agents enlisted in the self-management of risk, or as compassionate gifts that institute top down relations of inequality.   Instead, the book argues for research illuminated by the material practices of injecting drug users as living at the interface of neoliberal as well as compassionate policies to explore what helps keep injecting drug users afloat. In re-writing the ‘biography of the syringe’ Vitellone elaborates an approach that reconfigures possibilities for how  sociological problems are constructed and illuminates practices of critical intellectual inquiry grounded in ethnography.  The book makes a really important contribution to STS as well as medical sociology and critical public health.