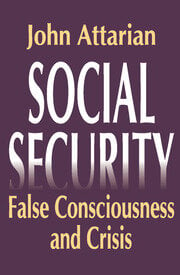 One of today's most important national concerns is the projected bankruptcy of Social Security some time in the next few decades and its consequent inability to pay full benefits on time. Yet despite two decades of warnings about this, nothing is being done. The saying that Social Security is the third rail of American politics-touch it and you die-still holds true. In Social Security: False Consciousness and Crisis, John Attarian argues that the major cause of the current impasse is the misleading manner in which the program has been depicted to the public and the beliefs about Social Security which prevail as a result.Most Americans see Social Security as retirement insurance under which taxpayers pay premiums to buy benefits for old age, with their contributions being held in a trust fund which will pay guaranteed benefits which will be theirs as an earned right as America "keeps its compact between the generations." Attarian demonstrates that this false picture was deliberately fostered by Social Security officials to ensure the program's constitutionality while downplaying the power of Congress to eliminate, cut, delay, or tax benefits or deny them to certain classes of people. As the core of his argument shows, Social Security was structured and presented in this manner to the public as well so as to make it popular and politically invulnerable. While this strategy succeeded, it was inaccurate in crucial respects, and the inaccuracies have worsened as the program has aged. The resultant false consciousness about Social Security has decisively shaped the responses to the program's financial crises over the last two decades and helped preclude corrective action. Attarian attacks all of the misconceptions about Social Security point by point so that debate can proceed based on realities, not misunderstandings. He addresses as well issues surrounding Social Security reform, showing how numerous proposals now circulating have lethal faults. Most of these refuse to cut current benefits and are thereby saddled with the huge costs of transition to a new system. Others risk politicizing the stock market. Virtually all ignore the larger economic and political context that threatens to defeat their purpose. Attarian concludes with his own proposal to radically restructure the program from a universal entitlement to a floor of protection.Treating the Social Security crisis in unusually broad perspective, Attarian is critical of both the status quo and the privatization camps, and his recommendations offer an alternative to both. The book will be of interest to policy makers as well as citizens concerned about the future of Social Security.John Attarian is adjunct scholar at the Mackinac Center for Public Policy in Midland, MI. He is the author of Economism and the National Prospect."A contribution to the important discussion of Social Security's fragile future and our options to restore its health."--Dorcas R. Hardy, former Commissioner of Social Security and author of Social Insecurity: The Crisis in America's Social Security System and How to Plan Now for Your Own Financial SurvivalWell written and drawing on lots of research. Does a good job explaining the coming crisis in Social Security, particularly the often overlooked political aspects. Attarian is especially thorough in reporting how the program was misleadingly presented to the public, and on the discrepancies between the perceptions and the realities of Social Security."--A. Haewoth Robertson, The Retirement Policy Institute"As the United States (along with the rest of the developed countries) debates how to reform our pay-as-you-go retirement system and make it sustainable in an aging world, it is essential that we speak and think clearly about how we got here. We need to look critically at the dysfunctional mythology surrounding words 'trust fund,' 'social insurance,' 'earned rights,' and 'lock box.' That's just what John Attarian does in this comprehensive and critical overview of the hisotry of Social Security. It's a first rate peice of work."--Peter G. Peterson, The Blackstone Group"Nearly every historian who looks carefully at growth of Social Security both as a federal program and as a popular mythology comments at least in passing on how the artful or shall we say downright deceitful use of key terms like insurance and statutory right has to pave the way for the programs expansion. At last, John Attarian tells the full story. In comprehensive detail, he shows, blow by blow, of how Social Security's key leaders and advocates were compelled to describe the program in one way to the public and in an entirely different way to legislators and judges. America's understanding of Social Security remians confused today, even as discussion of far-reaching reforms are underway which makes this book timely indeed."--Neil Howe, Life Course Associates