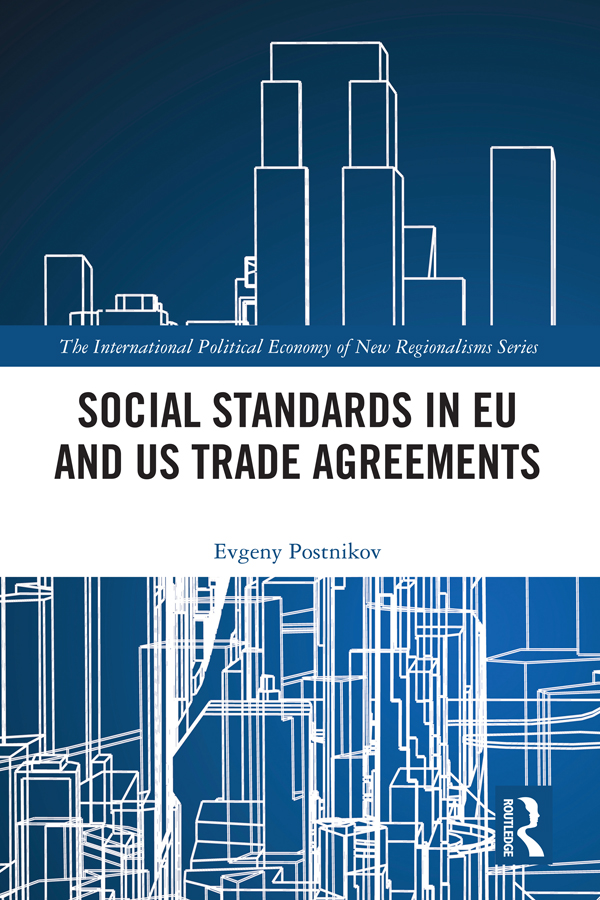 Social Standards in EU and US Trade Agreements

This book examines the causes and consequences of social standards in US and EU preferential trade agreements (PTAs).

PTAs are the new reality of the global trading system. Pursued by both developed and developing countries, they increasingly incorporate labor and environmental issues to prevent a race to the bottom in social regulation and counter protectionism. Using principal-agent theory to explore why US PTAs have stricter social standards than those signed by the EU, Postnikov argues that the level of institutional insulation of trade policy executives from interest groups and legislators determines the design of social standards. In the EU, where institutional insulation is high, social standards mirror the normative preferences of the European Commission leading to a softer approach. In the US, where such insulation is low, social standards are driven by interest groups and legislators they control resulting in a stricter approach. This book shows that both approaches can be effective but work through different causal mechanisms. To test his argument, Postnikov draws on original data collected in Brussels, Washington, Santiago, Bogota, and Seoul.

This book will be of interest to all scholars and students working in the fields of International Political Economy and EU and US trade policy.

"Challenging conventional wisdoms, Postnikov persuasively argues how and why the US has stricter social standards than the EU in the design of preferential trade agreements. This book should be required reading for those convinced that globalization leads to a race to the bottom. Postnikov unveils how institutional factors and interest groups determine variation in labor and environmental standards in the global economy. Theoretically and empirically rich, Postnikov’s book makes a major contribution to research on social standards in both developed and developing economies." - Nita Rudra, Professor, Georgetown University, USA.

"Evgeny Postnikov has written an empirically rich and engaging account of the design of labour and environmental standard clauses in EU and US bilateral trade agreements. I also warmly recommended the book to those seeking insights into the inter-institutional dynamics of EU and US trade negotiations." - Johan Adriaensen, Assistant Professor, Maastricht University, Netherlands.

Chapter 2: Social Standards in EU and US PTAs: An Overview

Chapter 4: The Causes of Social Standards in EU PTAs

Chapter 5: The Causes of Social Standards in US PTAs

Chapter 6: The Effects of Social Standards in EU and US PTAs

Evgeny Postnikov is Lecturer in International Relations in the School of Social and Political Sciences at the University of Melbourne, Australia. His research interests centre on international political economy, especially trade policy and its links with non-trade issues, such as labor rights and the environment. He is particularly interested in the rise of bilateralism in global trade and the role the EU and others play in it. His work has been published in several leading outlets, including the Review of International Organizations, Journal of European Public Policy, Environmental Politics, New Political Economy and Journal of Common Market Studies.