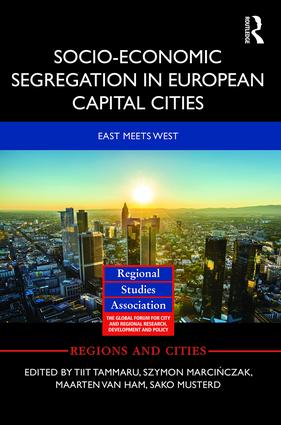 "It will be extremely useful for scholars concerned about general patterns of social inequality as well as specialists studying sociospatial division, gentrification, or segregation (ethnic as well as socioeconomic). The book could also be used to help teach courses on urban sociology and geography, housing studies, or social policy."

'This well-organized book provides the reader with a feel for the uniqueness of each city and its segregation problem. I especially appreciated the fact that the contributors combined statistical measures of segregation and mapped location coefficients with information on the city’s history, as well as its welfare and housing policies.'

is Assistant Professor at the Institute of Urban Geography and Tourism, Lódz, Poland.

In today’s globalised, knowledge-driven and networked world, regions and cities have assumed heightened significance as the interconnected nodes of economic, social and cultural production, and as sites of new modes of economic governance and policy experimentation. This book series brings together incisive and critically engaged international and interdisciplinary research on this resurgence of regions and cities, and should be of interest to geographers, economists, sociologists, political scientists and cultural scholars, as well as to policy-makers involved in regional and urban development.

For more information on the Regional Studies Association, visit www.regionalstudies.org

Did you know that as a Regional Studies Association member you’re entitled to a 30% discount on all Routledge books? To order, simply email Luke McNicholas ([email protected]), or phone on +44 (0) 20 701 77545 and declare your RSA membership.