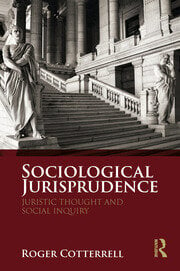 This book presents a unified set of arguments about the nature of jurisprudence and its relation to the jurist’s role. It explores contemporary challenges that create a need for social scientific perspectives in jurisprudence, and it shows how sociological resources can and should be used in considering juristic issues. Its overall aim is to redefine the concept of sociological jurisprudence and outline a new agenda for this.

Supporting this agenda, the book elaborates a distinctive juristic perspective that recognises law’s diversity of cultural meanings, its extending transnational reach, its responsibilities to reflect popular aspirations for justice and security, and its integrative tasks as a general resource of regulation for society as a whole and for the individuals who interact under law’s protection.

Drawing on and extending the author’s previous work, the book will be essential reading for students, researchers and academics working in jurisprudence, law and society, socio-legal studies, sociology of law, and comparative legal studies.

PART 1: THE JURISTIC POINT OF VIEW

2. The Nature of Legal Expertise

4. Why Jurisprudence is Not Legal Philosophy

6. Why Lawyers Need a Theory of Legal Pluralism

7. A Concept of Law for Global Legal Pluralism

8. The Nature of Transnational Law

10. A Transnational Concept of Crime

11. Culture as a Juristic Issue

Roger Cotterrell is Anniversary Professor of Legal Theory at Queen Mary University of London. Educated as a lawyer and a sociologist, he has written widely on sociology of law, jurisprudence and comparative law, and is a Fellow of the British Academy and of the (UK) Academy of Social Sciences.

In Sociological Jurisprudence, Roger Cotterrell convincingly argues that we need a broadly interdisciplinary, empirically grounded understanding of the social not only to understand how law actually operates in everyday life but to guide jurists in pursuing law's practical projects in the world. His insights are particularly useful for conceptualizing the very nature of a legal system given that legal and quasi-legal authorities inevitably operate in negotiation with each other and often do so without stable hierarchies to guide them. Providing both a summation of Cotterrell's prolific career and a forward-looking roadmap for scholars and jurists, Sociological Jurisprudence is a must-read for all who are interested in understanding and advancing law in the 21st century.

In this important and wide ranging addition to his considerable corpus Cotterrell nails his colours to the mast of sociological jurisprudence showing how, once distinguished from legal philosophy as well as from a social science of law, it can help in understanding the values law should be pursuing in the present period.

Cotterrell offers a sustained statement of the vital role of the sociologically-informed jurist in exploring the general idea of law, and applies his account, suitably developed for the twenty-first century, to emerging transnational legal phenomena and the clarification of legal values. This book is essential reading for anyone interested in general questions about law, both within and across states.

For much of the last century, jurisprudence has been pre-occupied by the question of its relationship to law as a social phenomenon. In this impressive volume, one the key figures in the debate builds a compelling case for the need for a sociological jurisprudence capable of articulating the idea of law amid diverse contexts and changing conditions for law’s authority, systematicity and unity.

Roger Cotterrell is an eminent scholar who combines juristic knowledge, sociological imagination and political values in a sensitive and brilliant manner. He has inspired generations of legal theorists and socio-legal scholars and keeps reminding us that sociological theory and interpretation must be intrinsic to legal scholarship, education and practice. In Sociological Jurisprudence Cotterrell carefully and incisively reads the works of Durkheim, Weber, Pound and many other sociologists and theorists of law to demonstrate the importance of classic theories and concepts in understanding current problems in global legal pluralism and transnational law.

In Sociological Jurisprudence, Roger Cotterrell shows how sociology can offer important guidance to the committed jurist – and to legal theory -- in this time of increasing legal pluralism, multiculturalism, and transnational law.

`For those scholars seeking to interrogate law from within law’s disciplinary boundaries more closely … this is an excellent and highly recommended work from which to start.’ — Ben Farrand, University of Warwick, UK