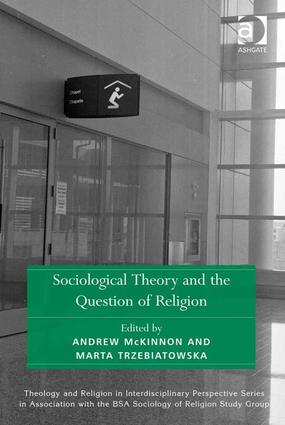 Sociological Theory and the Question of Religion

Religion lies near the heart of the classical sociological tradition, yet it no longer occupies the same place within the contemporary sociological enterprise. This relative absence has left sociology under-prepared for thinking about religion’s continuing importance in new issues, movements, and events in the twenty-first century. This book seeks to address this lacunae by offering a variety of theoretical perspectives on the study of religion that bridge the gap between mainstream concerns of sociologists and the sociology of religion. Following an assessment of the current state of the field, the authors develop an emerging critical perspective within the sociology of religion with particular focus on the importance of historical background. Re-assessing the themes of aesthetics, listening and different degrees of spiritual self-discipline, the authors draw on ethnographic studies of religious involvement in Norway and the UK. They highlight the importance of power in the sociology of religion with help from Pierre Bourdieu, Marx and Critical Discourse Analysis. This book points to emerging currents in the field and offers a productive and lively way forward, not just for sociological theory of religion, but for the sociology of religion more generally.

Introduction: Thinking Theoretically in the Sociology of Religion

PART I: The State of the Art and Science of the Sociology of Religion

1 Thinking Sociologically about Religion: A Step Change in the Debate?

2 What Sort of Social Theory Would Benefit the Sociology of Religion?

3 The Axial Age Religions: The Debate and its Legacy for Contemporary Sociology

5 The Sacramental Mechanism: Religion and the Civilizing Process in Christian Western Europe with Particular Reference to the Peace of God Movement and its Aftermath

6 Religion and Monetary Culture in the Sociology of Georg Simmel

7 Putting Baby Back in the Bath: Theorising Modernity for the Contemporary Sociology of Religion

PART IV: Ethnographies of Listening to Churches: Aesthetics and Rationality

8 Playing the Sensual Card in Churches: Studying the Aestheticization of Religion

11 Beyond Habitus: Researching Gender and Religion through the Ontology of Social Relations

Andrew McKinnon is Senior Lecturer in Sociology at the University of Aberdeen. He has published in numerous journals, particularly on the topic of religion and social theory. He is a member of the Editorial Boards of Sociology (Official Journal of the British Sociological Association) and the book series Critical Research in Religion; he is an Associate Editor of both The Canadian Journal of Sociology and of Sociology of Religion. Marta Trzebiatowska is Lecturer in Sociology at the University of Aberdeen. Her research interests include religion and gender, migration and social theory. She has published in the Journal of Contemporary Religion and Sociology. Her recent book (co-authored with Steve Bruce) explores the universal gender gap in religiosity (Why Are Women More Religious Than Men? 2012).