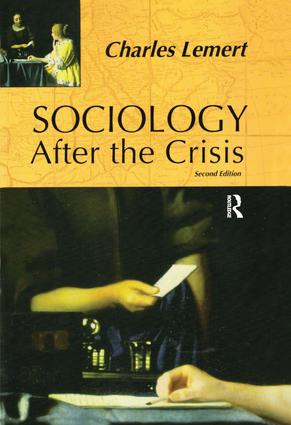 Sociology After the Crisis

Widely assigned and taught in senior capstone and social theory courses, Sociology After the Crisis offers the first systematic theory of social differences built on the sociological traditions by embracing to Durkheim, Weber and other familiar figures. The first edition was acclaimed for its nuanced and original rereading of Durkheim in relation to the theoretical reasons he and his contemporaries neglected race and gender. This new edition features two chapters of new material written in the summer of 2003, as the new social structures of the 21st century became increasingly clear. The new Chapter Ten draws upon 9-11, the "new world order" of two Bush presidencies, and globalization to show how individuals' lives and sociologies must be thought about in new ways. These events also highlight how American society and sociology have responded and sometimes failed in the struggle over the crisis of modernism. Reviews for the First Edition: "[This] expansive reimagining of the historical roots of sociological imagination - especially as it embraces voices and visions long lost to our most important national debates - is balm to the fractured soul of American society. Lemert's elegant and passionate volume will aid immeasurably in our nation's search for sane solutions to the crises of purpose and perspective he so skillfully explores." Michael Eric Dyson, author of Making Malcolm and Between God and Gangsta' Rap "Elegantly crafted." Steven Seidman, State University of New York at Albany

"Sociology After the Crisis is an eloquent and prophetic call for a relevant and engaged sociology capable of 'facing the world.' Anyone who cares for the fate of sociology should heed the call of this book."

"Charles Lemert writes practical sociology for all time, a provocatively probing sociology that thinks beyond inegalitarian nation states to new supportive structures for the world's peoples. One of the best writers in social science, Lemert here crafts a soul-filled exploration of globalizing societies still riven with great crises, deep inequalities, and too-rare attempts at liberating change."

A New Introduction to a New Crisis. Introduction to the First Edition. After the Crisis. Sociology as Theories of Lost Worlds. Modernity's Riddle and Durkheim's Lost Fathers. The End of Ideology, Really! Measured Selves in Weak Worlds. Structuring Differences. Three Ways to Think Structures and Ignore Differences. Measuring the Subject's Secrets. The Future of Sociologies. Structuring Differences After the Structures Disappeared.