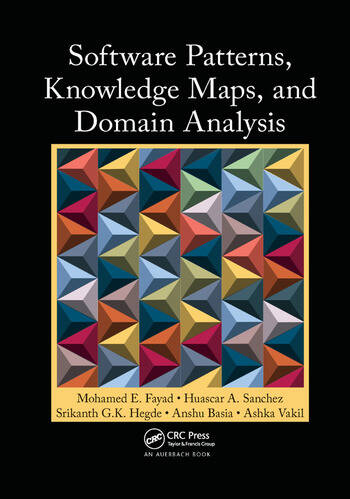 This book is designed to allow readers to master the basics of knowledge maps from their theoretical aspects to practical application. It begins with an overview of knowledge map concepts and moves on to knowledge map goals, capabilities, stable design patterns, development scenarios, and case studies. Each chapter of the book concludes with an open research issue, review questions, exercises, and a series of projects.

GOALS OF THE KNOWLEDGE MAPS

Development Scenarios: Setting the Stage
Introduction
Implementation Issues of the Knowledge Maps
Type versus Class within TOP
Design Type Specification Template
The Uses of Contracts in the Specification of Design Types
The Hook Specification Template
Specification of the User Model or Storyteller
Components
Aspect-Oriented Modeling
Aspects as Core Design Features in a System
Difference between the Aspect-Oriented Design
Approach and SSM
Identification of whether Aspects Will Be All the EBTs and All the BOs in a System
Understanding whether Aspects in AOP Will Represent Either EBTs or BOs of SSM in a System
Comparison between Extraction of Aspects in AOP, EBTs, and BOs in SSM
Modeling EBTs and BOs as Aspects
Summary
Open Research Issues
Review Questions
Exercises
Projects

CASE STUDIES OF THE KNOWLEDGE MAPS

Dr. Mohamed E. Fayad is currently a full professor of computer engineering at San Jose State University, from 2002 to present. He was a J.D. Edwards Professor, Computer Science and Engineering, at the University of Nebraska, Lincoln, from 1999 to 2002; an associate professor at the computer science and computer engineering faculty at the University of Nevada, from 1995 to 1999; and an editor-in-chief for IEEE Computer Society Press—Computer Science and Engineering Practice Press, from 1995 to 1997. He has 15+ years of industrial experience. Dr. Fayad is an IEEE distinguished speaker, an associate editor, editorial advisor, a columnist for the Communications of the ACM (Thinking Objectively), and a columnist for the Al-Ahram newspaper (two million subscribers); he was a general chair of IEEE/Arab Computer Society International Conference on Computer Systems and Applications (AICCSA 2001), Beirut, Lebanon, June 26–29, 2001; he is the founder of Arab Computer Society (ACS), being its president from April 2004 to April 2007.

is a PhD candidate in the University of California Santa Cruz’s Computer Science Department. His research interest includes software engineering, specifically source code curation, an approach to discovering, cleaning, and refining online code snippets upon which to build programs. Sanchez has an MS in software engineering from San Jose State University.

is a professional Internet security consultant and a freelance writer with a master’s degree to his credit. His areas of interest include Internet security, networking, social media marketing, antivirus software, adware, spyware removal and its management, Internet safety, network security policy, and broadband and Internet/security protocols. In addition, his domains of interest also include preparing articles, white papers, and status reports on diverse industries, businesses, global events, finance, and business management. Furthermore, he has published numerous articles on software patterns (analysis and design), pattern development, patterns composition, and knowledge maps, in association with Dr. Prof. M. E. Fayad. Srikanth is also an experienced freelance writer with more than 15 years of experience in writing books, articles, columns, critiques, and various other e-publications.

is a software engineer with extensive experience and management skills. Her specialization includes analyzing, designing, and developing complex enterprise solutions in agile environments. Anshu is highly proficient in Java, Spring, Struts, HTML, JavaScript, Rest Web services, SQL, and a multitude of other technologies used in modern applications. Currently, Anshu works for Quisk, a global technology company that partners with financial institutions and others to digitize cash and provide safe, simple, and secure financial services and cashless transactions for anyone with a mobile phone number. Prior to joining Quisk, Anshu worked as a software engineer at A2Z (subsidiary of Amazon.com) now known as Amazon Music. Anshu completed her second master’s in software engineering with focus on enterprise software technologies from San Jose State University, graduating with highest honors. Anshu’s first master’s degree is in computer applications from Banasthali Vidyapith, India.

is an accomplished software engineer who specializes in building highly complex enterprise applications. Ashka has 8+ years of extensive experience in architecture, design, and agile development. Ashka is an expert in mobile application and cloud application development. Ashka is highly proficient in Java, HTML, JavaScript, web services, SQL, and a multitude of other technologies used in modern web applications. Currently, Ashka works for SAP, a German multinational software corporation that makes enterprise software to manage business operations and customer relations. As a senior software engineer, she is responsible for building custom enterprise-grade mobile applications for SAP customers. Prior to joining SAP, Ashka worked as a software engineer at Tata Consultancy Services, the largest India-based IT services company. Ashka holds a master’s degree in software engineering with focus on enterprise software technologies from San Jose State University, graduating with highest honors.