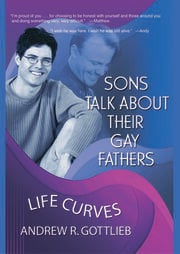 Examine the impact of disclosure on sons whose fathers are gay!

In this book, Andrew Gottlieb, author of Out of the Twilight: Fathers of Gay Men Speak, explores yet another side of the impact of homosexuality on families. He now looks at how sons react to learning that their fathers are gay, allowing us to see, over time, how this has changed their family relationships and their own lives. Simply and elegantly written, this psychoanalytically oriented qualitative research study is accessible to both the beginner and the more advanced researcher and practitioner. It draws from a wide range of literary, popular, and psychological sources and includes an interview guide, a reference section, and an index.

“When someone discloses as gay, lesbian, or bisexual, it is not just an individual event. It is a family event. Based on estimates of married gay, lesbian, and bisexual persons, a spouse's coming out affects up to 2,000,000 couples. Yet, its impact has been largely ignored. Children’s voices are the least often heard. . . . Little has been written about sons of fathers who came out during or after marriage. Data for studies that do exist most often draw from the fathers' point of view. . . . The significance of this study lies in its comprehensive, detailed picture of sons and gay fathers as they develop their separate self-images as well as the images of their son-father relationships over time. Painful, sensitive, often triumphant, the stories and [the author’s] analysis of their thoughts, perceptions, and feelings afford a multidimensional, longitudinal viewing. Step by step, we follow the complicated dance of these sons and fathers as they develop and define their connection.”
—from the Foreword by Amity Pierce Buxton, Author of The Other Side of the Closet: The Coming-Out Crisis for Straight Spouses and Families

Sons Talk About Their Gay Fathers: Life Curves is a storybook—an extended narrative moved along, but not overshadowed, by psychoanalytic theory. The Introduction briefly reviews more recent writings of the fathering experience as told by gay men themselves, setting the stage for: