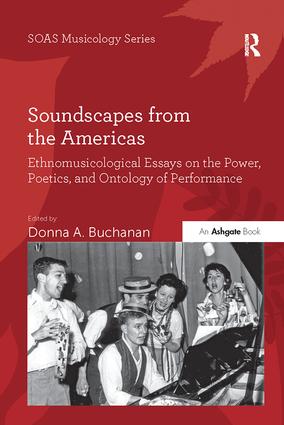 Soundscapes from the Americas

Ethnomusicological Essays on the Power, Poetics, and Ontology of Performance, 1st Edition

By Donna A. Buchanan

Dedicated to the late Gerard Béhague (1937-2005), whose pioneering work in Latin American music, popular culture, and performance studies contributed extensively to ethnomusicological discourse in the 1970s-1990s, this anthology offers comparative perspectives on the evolving legacy of performance ethnography in socio-musical analysis. President of the Society for Ethnomusicology from 1979-81, editor of its journal, Ethnomusicology, from 1974-78, and founder and editor of the trilingual Latin American Music Review from 1980 until his death, Béhague also established the ethnomusicology graduate program at the University of Texas at Austin in 1974, thereby influencing the training and thinking of dozens of the field’s practitioners. Among these are the volume’s eight authors, whose contributions reflect the heritage but also contemporary trajectories of Béhague’s scholarly concerns. Prefaced by an essay outlining key developments in the ethnography of performance paradigm, the volume’s seven case studies portray snapshots of musical life in representative communities of the Americas, including the southwestern and Pacific United States, Puerto Rico, Bolivia, Chile, Cuba, and Ecuador. Situated in milieus ranging from the indigenous festivals of the Andean highlands, to the competitive public gatherings of poet-singers in post-Pinochet Chile, to the Puerto Rican dance halls of the Hawaiian islands, these studies pose anthropological inquiries into the ontology of performance practice, the social power of poetic performativity, and the experience and embodiment of sound in place.

’The ethnography of musical performance is so fundamental to contemporary ethnomusicology that it is like the air we breathe. Buchanan’s introduction offers a new window to the genesis of this approach and its broad reach, and then points us to the next steps forward. The articles that follow explore the politics of performance and the power of performativity in relation to history, subjectivity, and specific events through a series of vibrant case studies from across the Americas. Of special interest to Latin Americanists, Americanists, and ethnomusicologists in general, this book both explains and exemplifies why the ethnography of performance has become foundational to the ethnomusicological project.’ Thomas Turino, University of Illinois at Urbana-Champaign, USA

Donna A. Buchanan is associate professor of music and anthropology and director of the music ensemble 'Balkanalia' at the University of Illinois, Urbana-Champaign, where she teaches courses in ethnomusicology and the musical cultures of the Balkans, Russia, and Eurasia. Her scholarly interests include the implication of music in cosmology, sound ecologies, and relations of social power and identity.