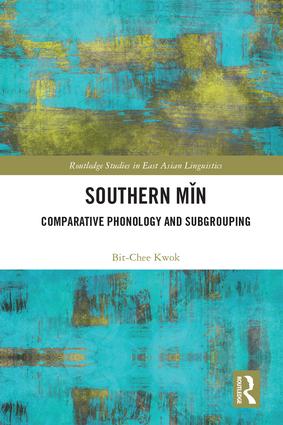 Southern Mǐn refers to a group of Chinese dialects spoken mainly in Southeast China and Taiwan. This group occupies a special position in the study of Chinese dialects, not only because of its large population of speakers (around 48 million) but also because of its preservation of various archaic linguistic features long lost in other dialects. In this book, B.C. Kwok applies the comparative method on new fieldwork data to reconstruct the common sound system of ‘Proto-Southern Mǐn’, from which all modern Southern Mǐn varieties emerged. The syllable initials, finals and tonal categories of Proto-Southern Mǐn are illustrated by more than 500 examples. In addition, this book offers an alternative view on the subgrouping of 12 Southern Mǐn varieties. It proposes that the Quánzhōu dialect and the Zhāngzhōu dialect form the two main branches of the dialect group. This book should be of great interest to advanced students and scholars in the fields of historical linguistics and Chinese dialectology.

"Hokkien Southern Min preserves time-honored phonological features that have been long lost in modern Mandarin Chinese. In this condense yet in-depth book Dr. Kwock provides us with a comprehensive treatment of how Southern Min evolves from its earlier stages to present diversified subdialects based on the fresh first-hand fieldwork and the historical comparative method. Many intriguing theoretical issues in particular dialectal subgroup have been cogently presented and tackled with author’s expert knowledge of a variety of Southern Min in their constant drift." - Lien Chinfa, Professor, Institute of Linguistics, National Tsing Hua University

This research monograph series is dedicated to bringing together a collection of books by scholars on the linguistic issues of East Asian languages. Predominantly focussing on Chinese, Japanese and Korean linguistics, this series is for linguists studying a single East Asian language, or a comparison of languages from the region. Approaches can be theoretical, applied, historical, comparative, experimental or interdisciplinary in nature. Proposed volumes are welcome from all areas, including theoretical aspects of a language or its dialects, language change and variation, bilingualism and multilingualism, language policy and politics, pragmatics and honorifics, discourse studies, corpus studies, language acquisition, etc. This series is also meant for heritage language teachers and teachers-to-be who study theoretical and applied aspects of their language to be better equipped for teaching. All titles in the series will be published in English and meant for an international readership.