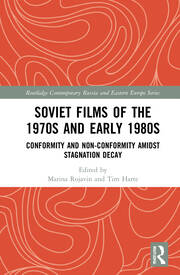 Soviet Films of the 1970s and Early 1980s: Conformity and Non-Conformity Amidst Stagnation Decay

This book explores a new character archetype that permeated Soviet film during what became known as the era of Stagnation, a stark period of loneliness, disappointment, and individual despair. This new type of character was neither negative nor positive, but nevertheless systematically undermined Soviet norms of behaviour, hairstyle, dress, lifestyle, and perspective, in stark contrast to Socialist Realism’s traditional, positive hero who fought for Soviet values and who vanquished the enemies of socialism. The book discusses a wide range of films from the period, showing how the new antiheroic archetype of Stagnation resonated through a multitude of characters, mostly male, and vividly reflected the realities of Soviet life. The book thereby provides great insight into the lives, outlook, and psychology of citizens in the late Soviet period.

Introduction Part I Violating norms in Soviet serio-comic genres of the stagnation era 1. Character Doubles as a Symptom in Late Soviet Cinema 2. Antiheroes from an Imagined West: The Very Same Munchhausen and The House that Swift Built Part II Unsettling intergenerational harmony, professional integrity, and moral superiority 3. Teaching (by) Violence: Antiheroines in Ilya Averbakh’s Other People’s Letters 4. Aging Kings on the Soviet Screen: Disappointment and Self-Doubt in Stagnation-era Cinema Part III Dualism, conformism, and impotence 5. The Soviet Flâneur Turned Marathoner: The Movement of Character and the Character of Movement in Georgii Daneliia’s 1970s Films 6. Unneeded Men in a Time of Compliance: Split Identity in Unfinished Piece for Mechanical Piano and Flights in Dreams and Reality Part IV. Auteur films: through the lens of time, space, and allegory 7. Getting to Know the Big Wide World: The Shaggy, the Vulgar and the Bumptious 8. Deconstructing the Stalin Myth: Unheroic Heroes in the Films of Aleksei German, Sr.