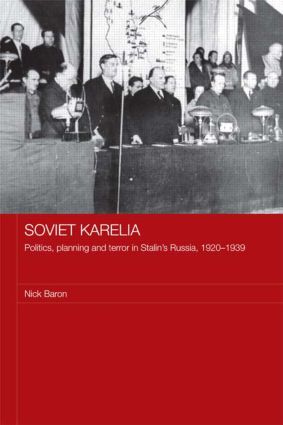 In 1920, Lenin authorised a plan to transform Karelia, a Russian territory adjacent to Finland, into a showcase Soviet autonomous region, to show what could be achieved by socialist nationalities policy and economic planning, and to encourage other countries to follow this example. However, Stalin’s accession to power brought a change of policy towards the periphery - the encouragement of local autonomy which had been a key part of Karelia’s model development was reversed, the state border was sealed to the outside world, and large parts of the republic's territory were given over to Gulag labour camps controlled by the NKVD, the precursor of the KGB. This book traces the evolution of Soviet Karelia in the early Soviet period, discussing amongst other things how political relations between Moscow and the regional leadership changed over time; the nature of its spatial, economic and demographic development; and the origins of the massive repressions launched in 1937 against the local population.

Introduction 1. ‘A Dark, Backward and Oppressed Periphery’: Histories of Karelian Space 2. ‘A Scandinavian Revolutionary Centre’: Borders, Boundaries and Spatial Ambitions, 1920–1928 3. The Limits of Autonomy: Finance, Planning and Population, 1920–1928 4. ‘A Question of Survival’: Centralisation and Control of Regional Space, 1928–1932 5. ‘The Urals-Kuznetsk Combine on a Smaller Scale’: Visions and Realities of Peripheral Development, 1933–1937 6. ‘The Republican NKVD Has Slaughtered All our Cadres’: Terror on the Periphery, 1935–1939. Conclusion

Nick Baron teaches twentieth century Russian and East European history and historical geography at the University of Nottingham, UK. He is the author of The King of Karelia. Col P.J. Woods and the British Intervention in North Russia, 1918-1919 (2007) and co-editor of Homelands. War, Population and Statehood in Eastern Europe and Russia, 1918-1924 (2004) and Sovetskaia Lesnaia Ekonomika. Moskva-Sever. 1917-1941 (2005). He is currently working on a cultural history of Soviet cartography.