Space, Power and the Commons
The struggle for alternative futures 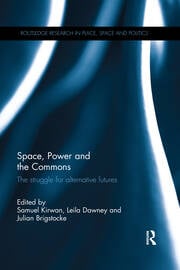 Space, Power and the Commons: The struggle for alternative futures

Across the globe, political movements opposing privatisation, enclosures, and other spatial controls are coalescing towards the idea of the ‘commons’. As a result, struggles over the commons and common life are now coming to the forefront of both political activism and scholarly enquiry. This book advances academic debates concerning the spatialities of the commons and draws out the diverse materialities, temporalities, and experiences of practices of commoning.

Part one, "Materialising the Commons" focuses on the performance of new geographical imaginations in spatial and material practices of commoning. Part two, "Spaces of Commoning", explores the importance of the turn from ‘commons’ to ‘commoning’, bringing together chapters focusing on the "doing" of commons, and how spaces, materials, bodies and abstract flows are intertwined in these complex and excessive processes. Part three, "An Expanded Commons", explores the broader registers and spaces in which the concept of the commons is at stake and highlights how and where the commons can open new areas of action and research. Part four, "The Capture of the Commons", questions the particular interdependence of ‘the commons’ and ‘enclosure’ assumed within commons literature framed by the concept of neoliberalism.

Providing a comprehensive introduction to the diverse ways in which ideas of the commons are being conceptualised and enacted both throughout the social sciences and in practical action, this book foregrounds the commons as an arena for political thought and sets an agenda for future research.

Part I: Materialising the Commons  1. Building the commons in eco-communities   2. A politics of the common: Revisiting the late nineteenth century Open Spaces movement through Rancière’s aesthetic lens   3. A Spirit of the Common: Reimagining "The Common Law" with Jean-Luc Nancy  Part II: Commoning  4. The More-than-Human Commons : From Commons to Commoning   5. ‘Where’s the trick?’: Practices of commoning across a reclaimed shop front  Part III: An Expanded Commons  6. Expanding the subject of planning: enacting the relational complexities of more-than-human urban common(er)s   7. Occupy the Future   8. Imaginaries of a Global Commons: Memories of Violence and Social Justice   Part IV: The Capture of the Commons 9. The Matter of Spirituality & the Commons   10. Controlled Natures: Disorder and Dissensus in the Urban Park

"Space, power and the commons is an important and timely contribution in an lively and exciting area of scholarship and praxis. In particular, it offers us insights into the practice of ‘commoning’: the multiple practices, enactments and engagements that constitute the commons. The commons, the contributors remind us, does not precede its performances. Given that the commons constantly faces erasure and dismissal, the book itself, a collective endeavor, is itself an important form of commoning. It helps to make the commons visible: While attentive to the dangers of its romanticization, it is alert to its urgent political promise." - Nicholas Blomley. Professor, Simon Fraser University