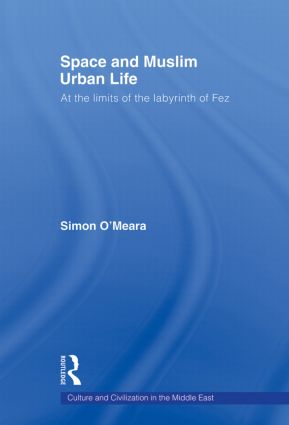 At the Limits of the Labyrinth of Fez, 1st Edition

This book develops academic understanding of Muslim urban space by pursuing the structural logic of the premodern Arab-Muslim city, or medina. With particular reference to The Book of Walls, an historical discourse of Islamic law whose primary subject is the wall, the book determines the meaning of a wall and then uses it to analyze the space of Fez.

One of a growing number of studies to address space as a category of critical analysis, the book makes the following contributions to scholarship. Methodologically, it breaks with the tradition of viewing Islamic architecture as a well-defined object observed by a specialist at an aesthetically directed distance; rather, it inhabits the logic of this architecture by rethinking it discursively from within the culture that produced it. Hermeneutically, it sheds new light on one of North Africa's oldest medinas, and thereby illuminates a type of environment still common to much of the Arab-Muslim world. Empirically, it brings to the attention of mainstream scholarship a legal discourse and aesthetic that contributed to the form and longevity of this type of environment; and it exposes a preoccupation with walls and other limits in premodern urban Arab-Muslim culture, and a mythical paradigm informing the foundation narratives of a number of historic medinas.

Presenting a fresh perspective for the understanding of Muslim urban society and thought, this innovative study will be of interest to students and researchers of Islamic studies, architecture and sociology.

"A meticulously researched, illustrated, and annotated investigation of urban space in the Muslim world. It is eloquently written and its arguments are well developed and concisely stated… The up-to-date bibliography (pp. 123–45) will prove an invaluable aid to any student of the historical development of the Islamic city as urban space or of the theory and practice of Islamic architecture… O’Meara’s ability to select and situate the rich array of primary source material that one encounters throughout the text distinguishes him as an eminent researcher on the premodern Arab-Muslim city and its religious and cultural roots… The book is a superb and most welcome addition to the field and will for years to come enlighten those who walk the spaces of the medinas of the Arab-Muslim world." - Kenneth Honerkamp, University of Georgia, Journal of Islamic Studies Advance Access (December 14, 2012).

"Recently awarded an "honourable mention" in the annual academic book prize awarded by The British Society for Middle Eastern Studies (BRISMES). The judges said of it: "In this short but packed book Simon O'Meara brings, in the words of the reviewer, 'a new depth and sophistication' to the literature on the Islamic city. In an examination showing intimate on- the-spot knowledge he homes in on space rather than monuments to interpret pre-modern Fez not as a UNESCO World Heritage site but as a machine for living. He assembles an impressive body of legal data to explain the purpose of the many walls that subdivide Fez, with far- reaching implications for the study of other Islamic cities." - BRISMES, 2008

"The experience of reading O’Meara’s slim but dense monograph is, in a way, similar to this description of visiting Fez: challenging, at times suggestive rather than conclusive, but ultimately mind expanding, a “well of sky” and, in the humility it inspires, an arrival deferred" - ZAYDE ANTRIM, International Journal of Middle East Studies, 41, 2009

Simon O'Meara is currently Assistant Professor of History of Art at the American University of Kuwait. He researches the sociological dimension of Islamic Art and Architecture, with a regional focus on the art and architecture of North Africa.