Spaces and Places in Western India
Formations and Delineations 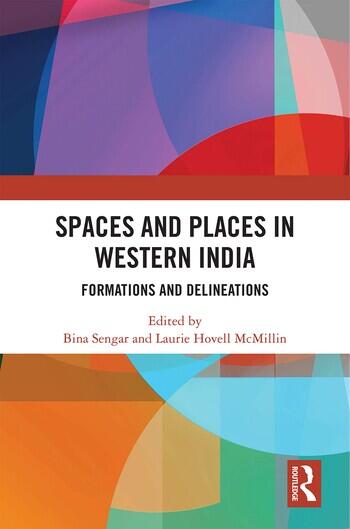 Spaces and Places in Western India: Formations and Delineations

This book studies places and spaces in Western India both as geographical locations and as imagined constructs. It uncovers the rich history of the region from the perspective of places of pilgrimage, commerce, community, expression and indigeneity.

The volume examines how spaces are intrinsically connected to the lived experiences of people. It explores how spaces in Western India have been constructed over time and how these are reflected in both historical and contemporary settings – in the art, architecture, political movements and in identity formation. The rich examples explored in this volume include sites of Bhakti and Sufi literature, Maharashtrian-Sikh identity, Mahanubhav pilgrimage, monetary practices of the Peshwas and the internet as an emancipatory space for the Dalit youth in Maharashtra. The chapters in this book establish and affirm the forever evolving cultural topography of Western India.

Taking a multidimensional approach, this book widens the scope of academic discussions on the theme of space and place. It will be useful for scholars and researchers of history, cultural studies, geography, the humanities, city studies and sociology.

PART I Urban, rural and indigenous spaces in Maharashtrian politics and environment

2 The spatial analysis of the transition of the land revenue system in Western India (1761–1836), with special reference to Indapur Pargana

4 Internet as an emancipatory space: case study of Dalits in Maharashtra

7 Blurred lines: historical knowledge and the politics of statues

8 Karle/Ekvira: many places over time, and at once

9 The significance of place in early Mahānubhāv literature

11 Emplacing holiness: the local religiosity between Vaishnavas, Sufis and demons

Bina Sengar is an Assistant Professor in Department of History and Ancient Indian Culture, Dr. Babasaheb Ambedkar Marathwada University, Aurangabad, and was a Fulbright Fellow for the year 2018–2019 at Florida International University, Miami. She has published on various themes related to state policy and tribal studies in India. Her recent articles on tribal communities in Western India are: ‘Policies for Ethnic Communities’ Assimilation in India: A Gandhian Perspective’ (2018), ‘Trade Routes and Commercial Networks in Deccan-Marathwada during Seventeenth and Eighteenth Centuries’ (2017) and ‘Prospects for Sustainability in Human–Environment Patterns: Dynamic Management of Common Resources’ (2017).

is a Professor of Rhetoric and Composition at Oberlin College, USA. An interest in the construction of place animates her work: English in Tibet, Tibet in English: Self-Presentation in Tibet and the Diaspora (2001) and Buried Indians: Digging up the Past in a Midwestern Town (2006). More recently, her travel writing has appeared in The Lonely Planet Travel Anthology (2016), Travel Writing: Theory and Practice (2013) and in other publications. She has researched and travelled in Maharashtra for many years.